Part 5, time to leave the big metropolis of Seoul and head towards Sokcho at the east coast to visit the beautiful nature of Seoraksan National park. But not before visiting one last and possibly the most beautiful palace in Seoul, Changdeokgung Palace.

Since I had not been able to fit a visit to the highly recommended Changdeokgung Palace in my schedule of the day before I had decided to postpone my departure to Sokcho by half a day. Early in the morning I packed my backpack and said goodbye to Emily, my lovely host at Lee & No Guesthouse. At the Euljiro-3-ga subway station I found myself a locker to store my backpack and continued to the Anguk station. After a short walk I arrived at the Donhwamun entrance gate of the palace, a beautiful large wooden two-storey complex.

Changdeokgung Palace was the second royal villa built following the construction of Gyeongbukgung Palace in 1405. It was the principal palace for many of the Joseon kings and is the most well-preserved of the five remaining royal Joseon palaces. The palace grounds are comprised of a public palace area, a royal family residence building, and the Huwon rear garden. Buyongjeong, Buyongji, Juhabru, Eosumun, Yeonghwadang, Bullomun, Aeryeonjeong, and Yeongyeongdang are some of the many pavilions and fountains that occupy the garden. The most beautiful time to see the garden is during the fall when the autumn foliage is at its peak and the leaves have just started to fall.

TIP: You can buy an Integrated Palaces Ticket for 10.000 KRW. This gives you access to the Four Palaces (Changdeokgung Palaces (including Huwon Secret Garden), Changgyeonggung Palace, Deoksugung Palace, Gyeongbokgung Palace) and Jongmyo Shrine. The ticket is valid for one month.

NOTE: It is only possible to enter the Huwon Secret Garden on a 90 min guided tour. Tours in English start from the garden entrance (NOT palace entrance) at 11:30 and 15:30. 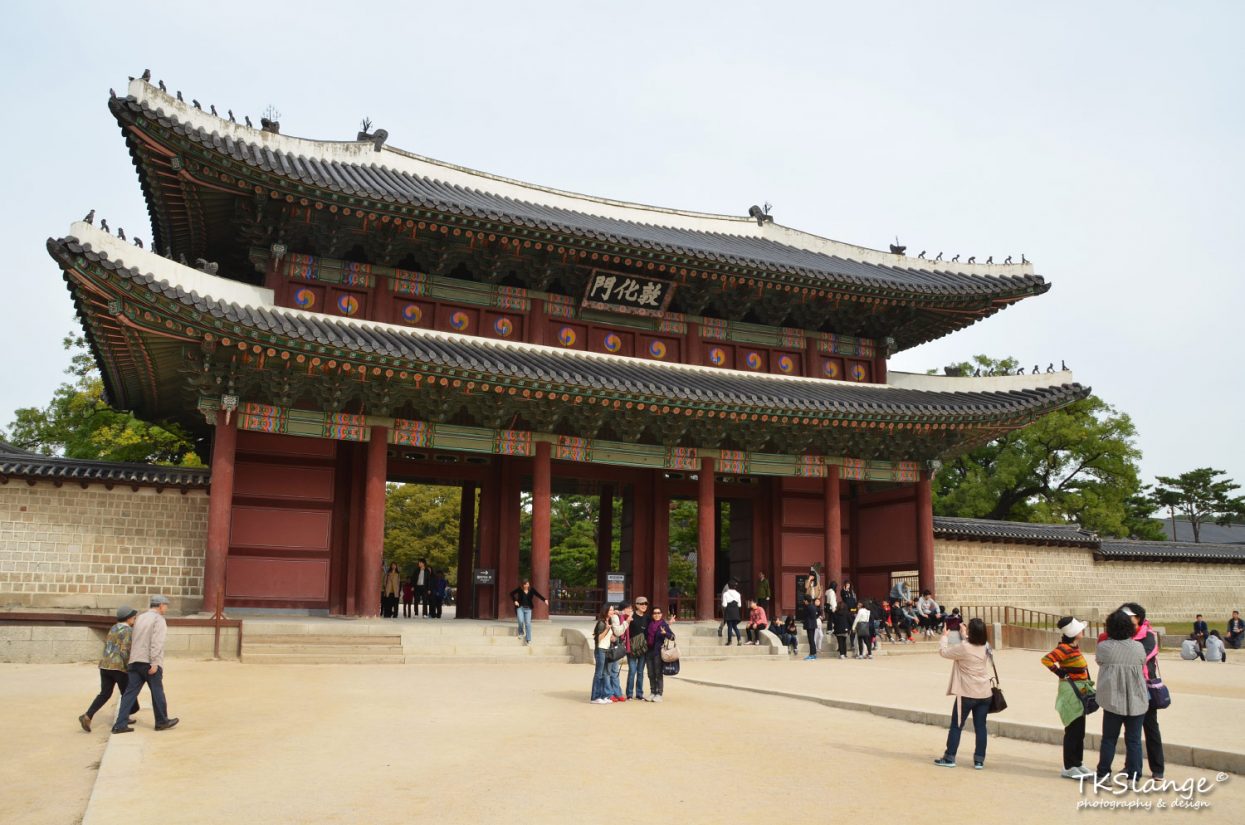 The entrance gate was a good introduction of the beautiful architecture in the rest of the Palace. Unfortunately I did not have time to join a guided tour to learn more about the Palace, but I recommend anybody to do this. Instead I had to do it with the information I got from my Lonely Planet. Besides not having time to join a guided tour through the palace I also wasn’t able to join a tour through the Huwon Secret Garden that lies just north of the palace. This is supposed to be one of the highlights of Changeokgung and can only be entered on a 1.5 hour guided tour. 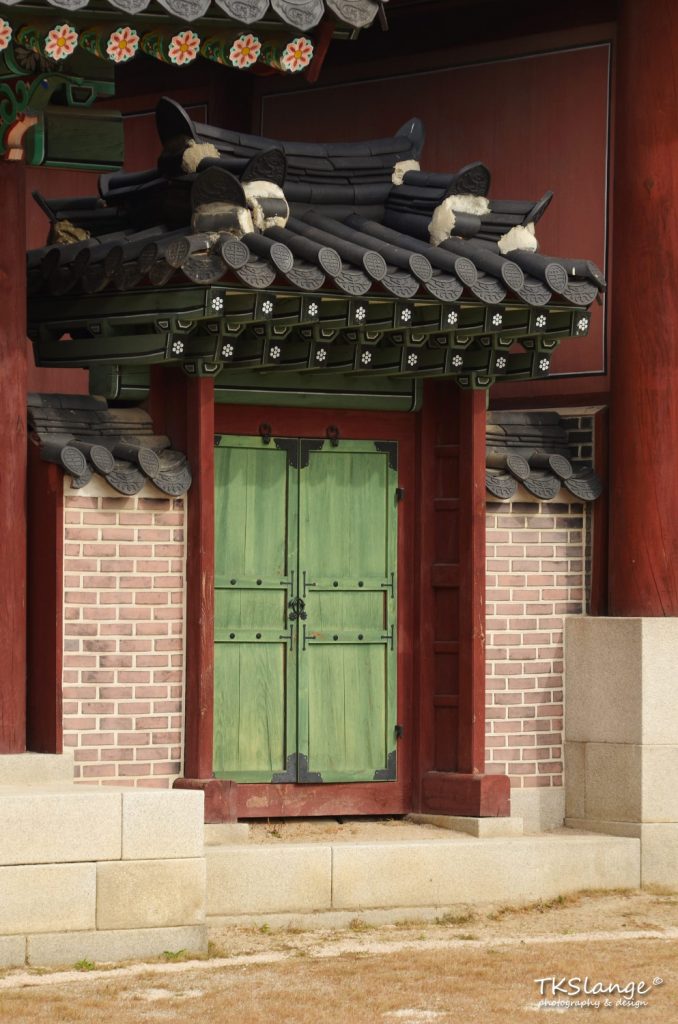 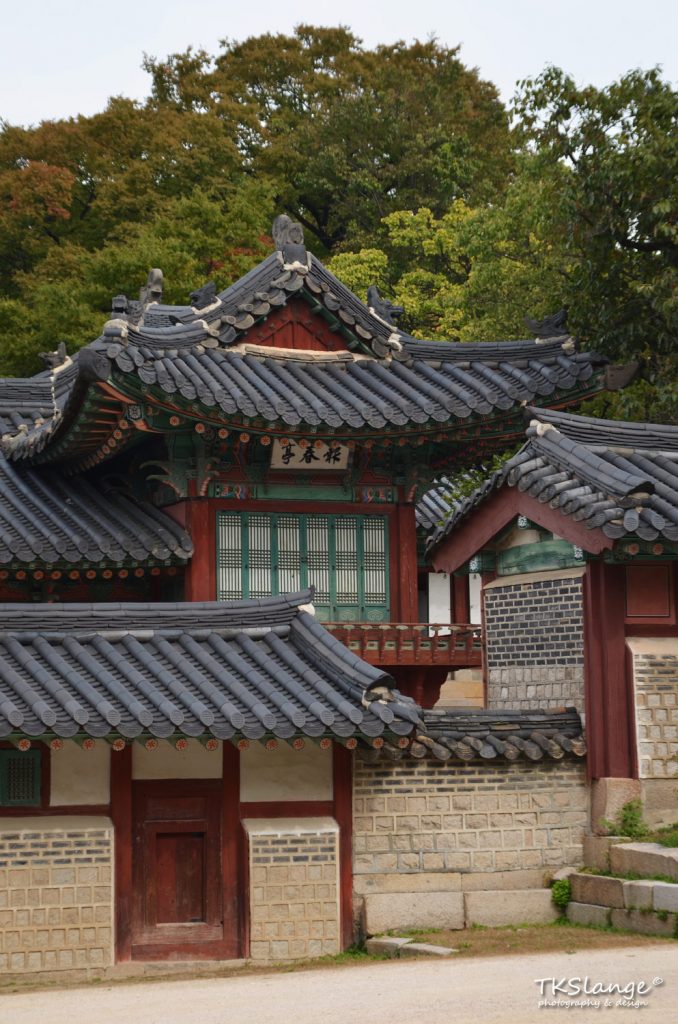 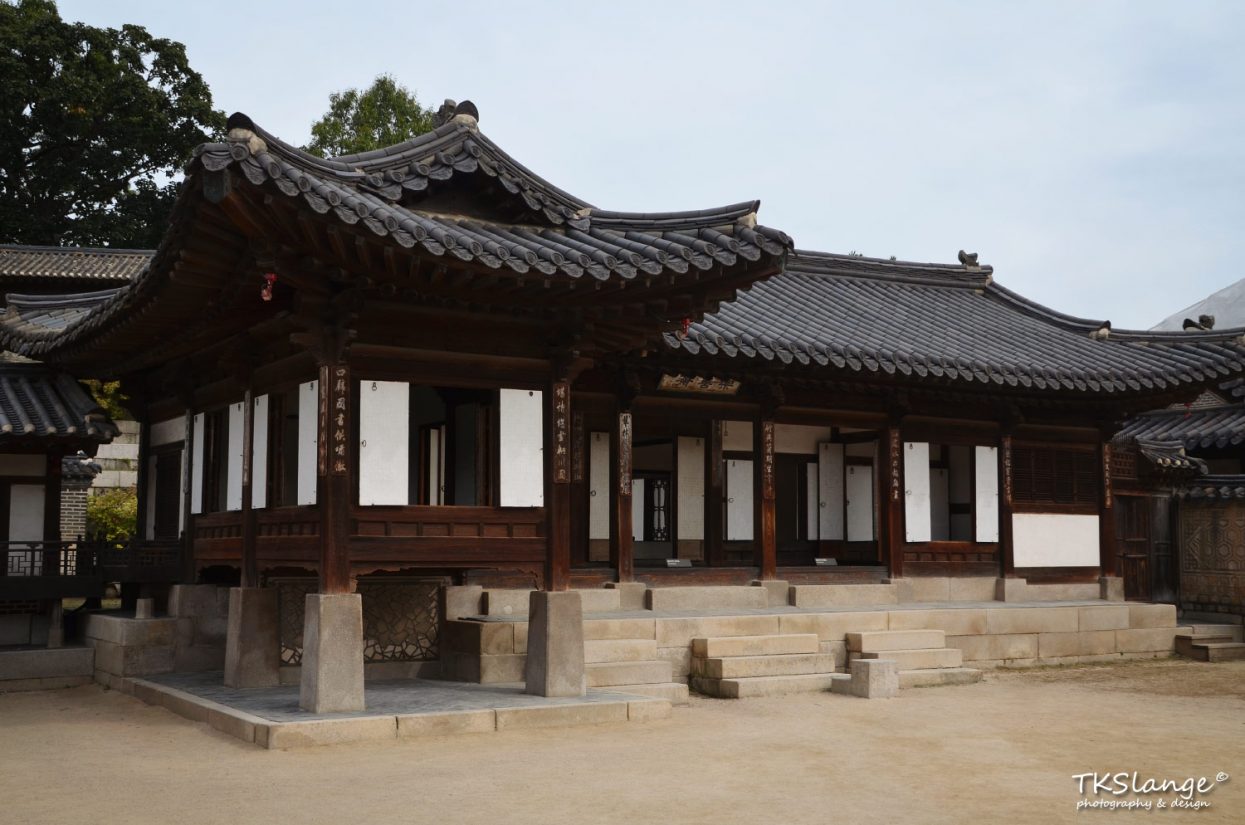 Nakseonjae (Mansion of Joy and Goodness) was built by King Heonjong for his fourteen-year-old concubine Kim Gyeongbin.

Like the day before there were again many children visiting the palace on school trips, although not as many as at Gyeongbokgung Palace. This time they fortunately seemed more interested in the strories about the palace then me. 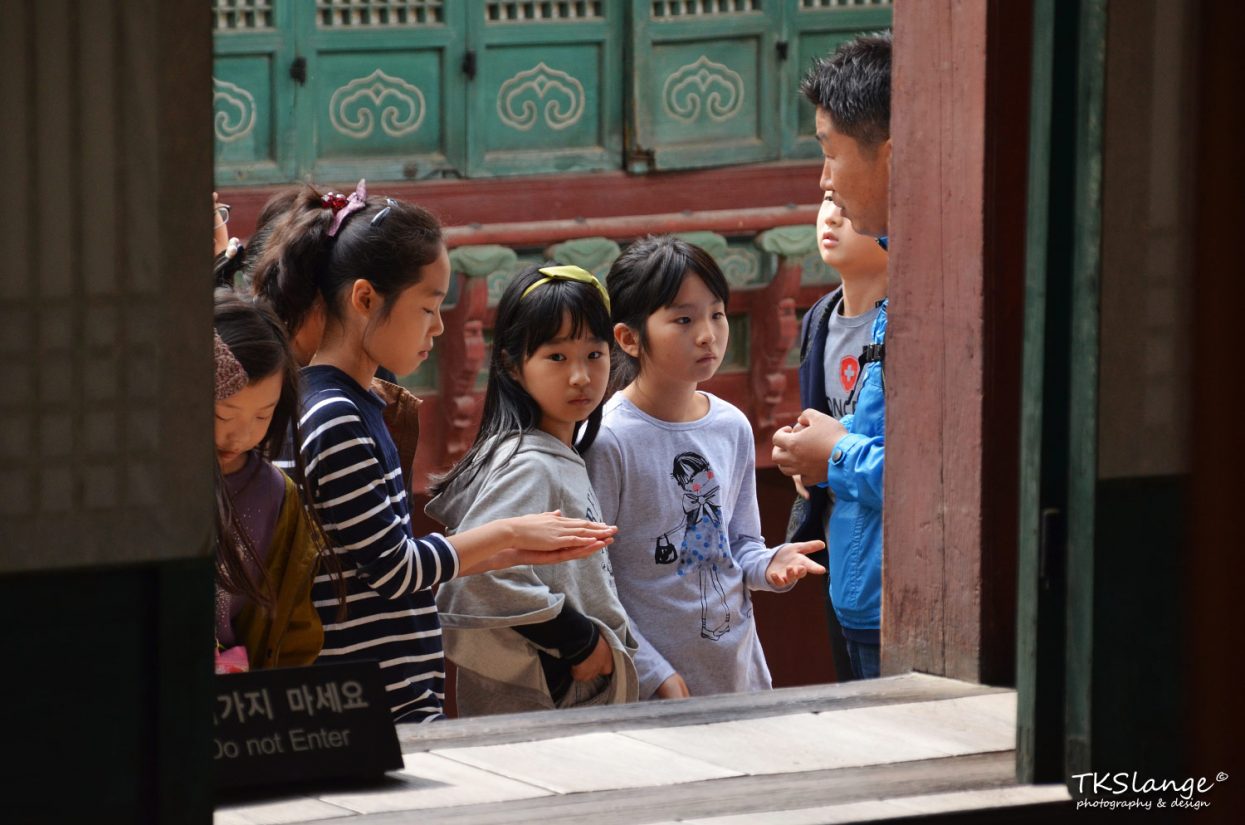 Korean kids listening to the stories about the Changdeokgung Palace.

Most buildings in the Changdeokgung Palace, and also other palaces, have animal-shaped statues or dragon heads on the vertical ridges of their rooftops. Since I had no guide to ask about these figures I had to look it up on the internet at home. Fortunately the Cultural Heritage Administration of Korea could tell me all about them. Apparently these figures are called Japsang and were not only used as decorative symbols to show the dignity and grandeur of a building, but also as shamanic symbols to chase away evil spirits and misfortune. They are always placed in odd numbers, but the actual number may vary from building to building. 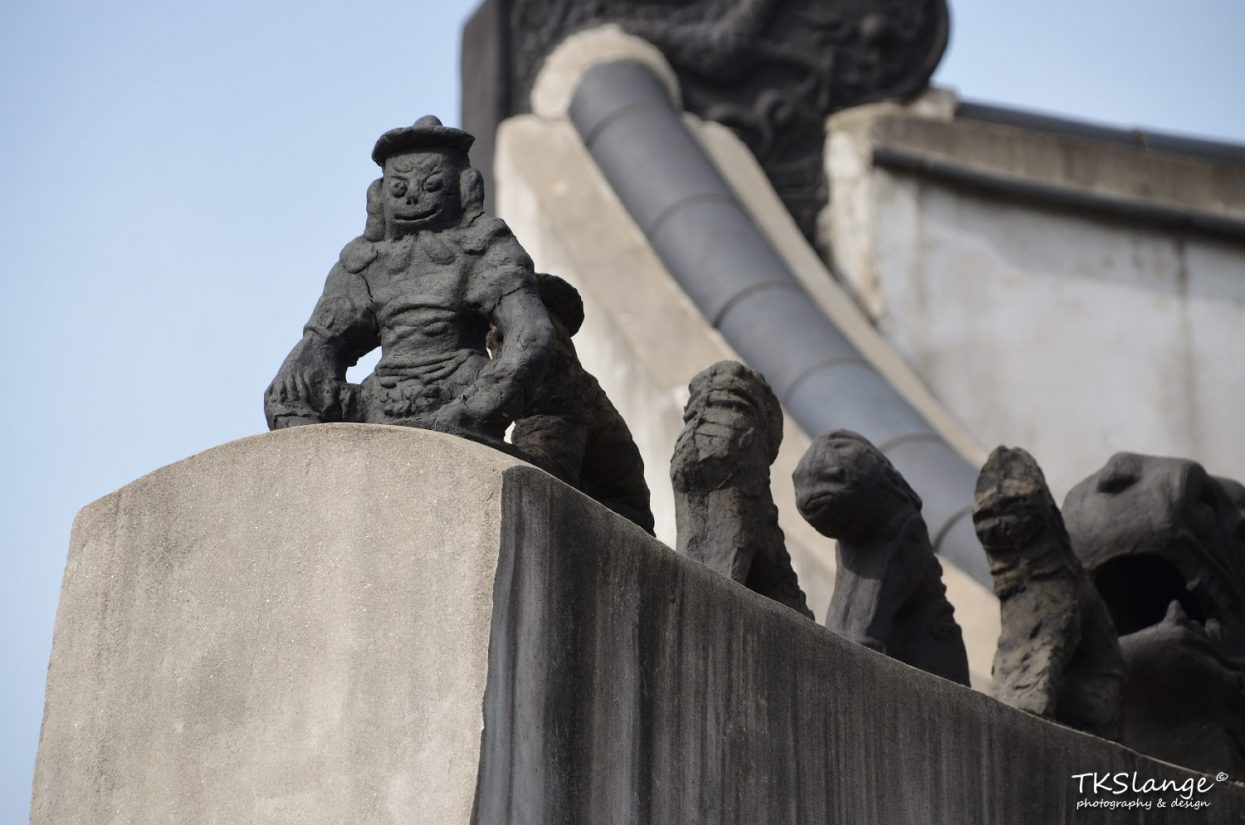 Small animal-shaped statues the vertical ridges of the rooftop. 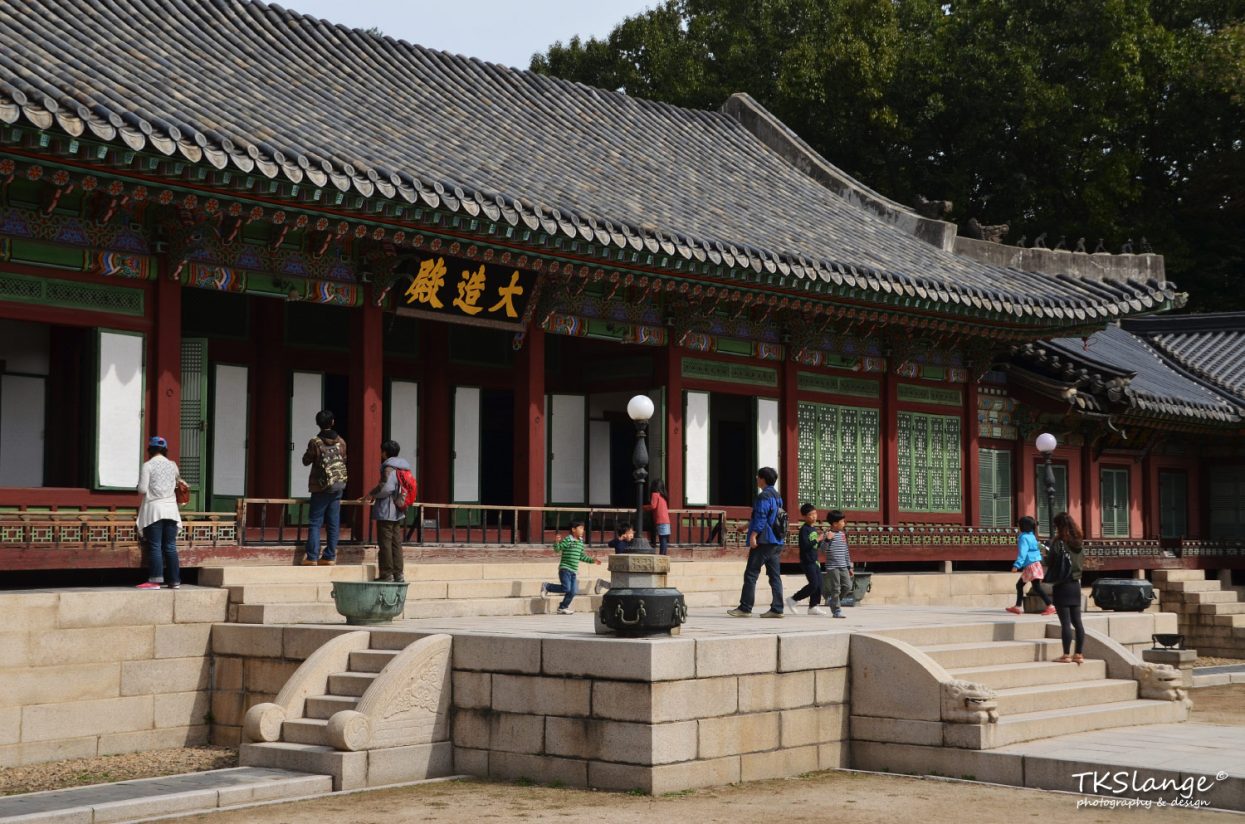 Something you see everywhere in the living quarters are ovens under the floors, usually including a large chimney. This is the ondol floor heating, which can also be found in all traditional housing. Nowadays the heating system has been replaced by electric heating, but in the old days the wooden floors where heated from underneath by the hot air coming from the ovens. 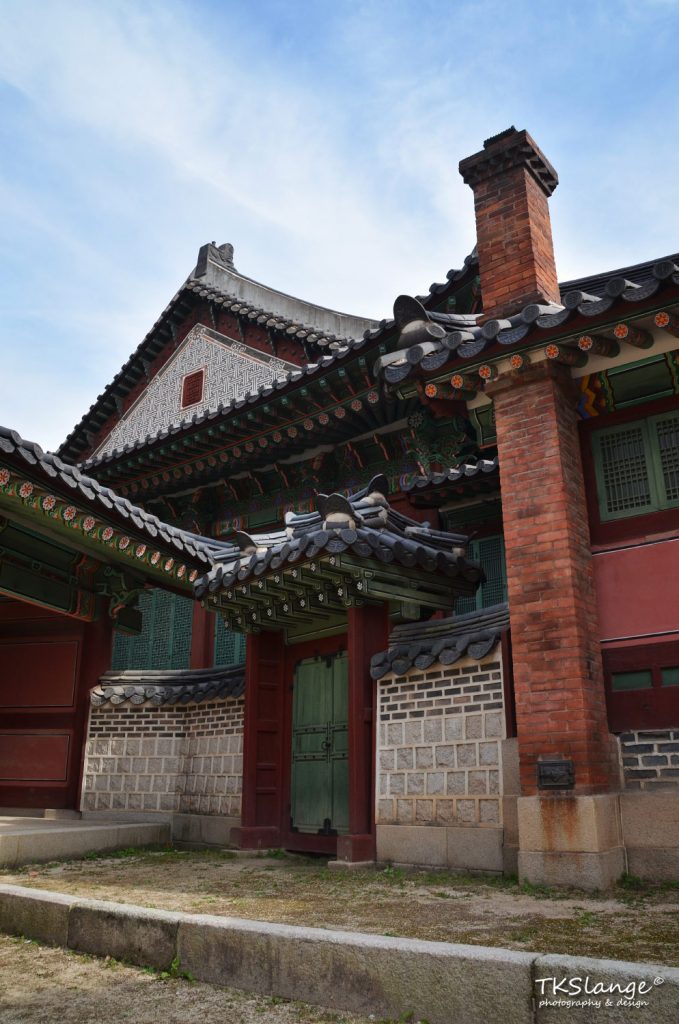 A chimney of the traditional ondol floor heating.

On of the most impressive sights in the Changdeokgung Palace is Injeongjeon, the impressive two-storey main hall. This hall was used for major state affairs, including the coronation of the new king and receiving foreign state envoys. Originally built in 1405, it was rebuilt in 1610 after being burned down during the 1592 Japanese invasion, and rebuilt another time in 1804 after being destroyed by a fire. 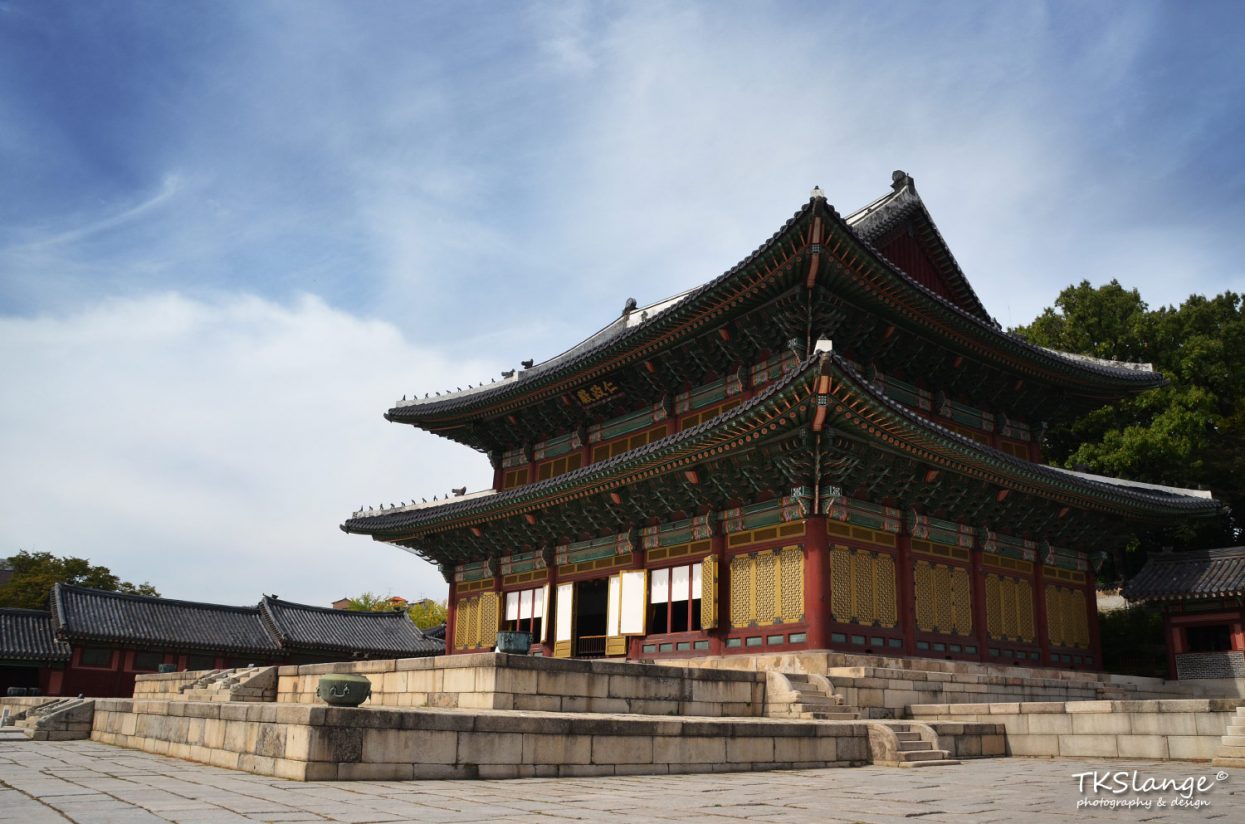 In front of the main hall stand two rows of rank stones on either side of the path to the entrance. These stones indicate the location where ministers would line up during ceremonies at the Injeongjeon Hall. The more important the official, the closer to the throne hall (and so the king) they would stand. 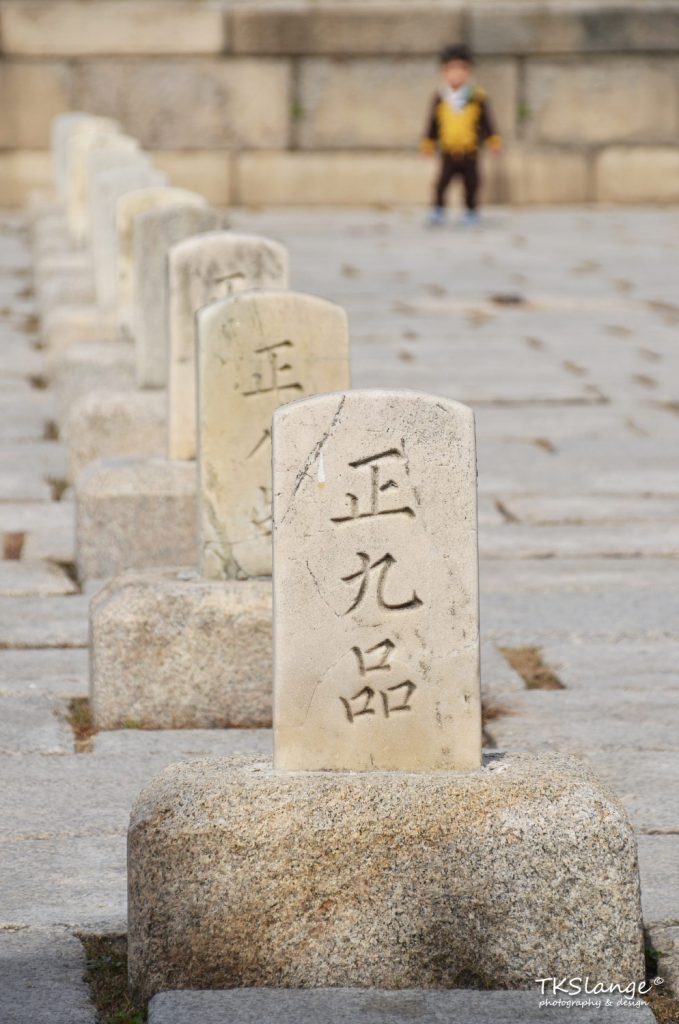 Rank Stones in front of Injeongjeon.

At this point my time in Seoul had really come to an end and it was time to move on to my next destination. By subway I went back to the Euljiro-3-ga station to pick up my backpack and continued to the Gangbyeon East Bus Terminal. As I was moving further and further away from the city centre I noticed that the amount of English signs was dropping rapidly. Fortunately there was English speaking staff at the bus station, so I was able to find the right ticket office quite easily and buy a direct ticket to Sokcho (17.300 KRW). After another 45 min waiting it was time for me to depart. To my surprise Korean intercity buses are very luxurious. There was plenty of leg space, even for my long legs, and the seats where very comfortable. The 3 hour journey with a short stop about half way was over before I knew it.

At about 19:00 we arrived at Sokcho Intercity Bus Terminal (Note that there is also an Express Bus Terminal in Sokcho!). My original plan was to find a place to stay a close as possible to the entrance of Seoraksan National Park. Since I had no idea where to go I decided to give the Tourist Hotline a call. Although the lady on the phone was very helpful, she was not able to find a hostel near the park for me. I guess staying near the park entrance comes with a price… Instead I decided to just walk into town and try to find a hostel or cheap motel. This was easier said than done, since I couldn’t read a thing on the neon signs, which were all in Korean. A bit lost I ended up at a bus stop where I took a look on the map. A bypassing Korean couple had clearly noticed that I was a bit lost and offered to help me. Fortunately the husband spoke some English and I was able to explain my problem. As by faith the couple was on exactly the same quest as me, namely looking for a place to stay. They had actually arrived by the very same bus and had already been looking at several motels. However, the told me that, since it was autumn, all accommodation was packed with Koreans who where going to hike in Seoraksan NP for the weekend. They immediately asked me to join them in finding a place to stay and since I could very well use the help I decided to join them. Before continuing our quest the couple invited me over for a drink in a nearby coffee shop. The conversation we had was not quite fluent, but we managed to communicate well. At about 9 o’clock we decided to continue our search before all rooms would really be filled. Since I didn’t want to pay over 40.000 KRW for a night we decided to check out one of the cheap motels near the bus station. By coincidence the motel had exactly two rooms left and even at a price of 40.000 KRW. Perfect for all of us. At this point the couple offered to pay for my room. Apparently I reminded them of their son and they felt they had to help me (although money was not an issue for me at all). After politely refusing their offer they kept insisting and I decided to take the offer in order not to insult them. How about that? Premium Korean hospitality.

I have no idea what this motel is actually called, but it’s right next to the bus terminal. The rooms are decent basic rooms. Note that some rooms have beds and some have traditional floor mattresses. 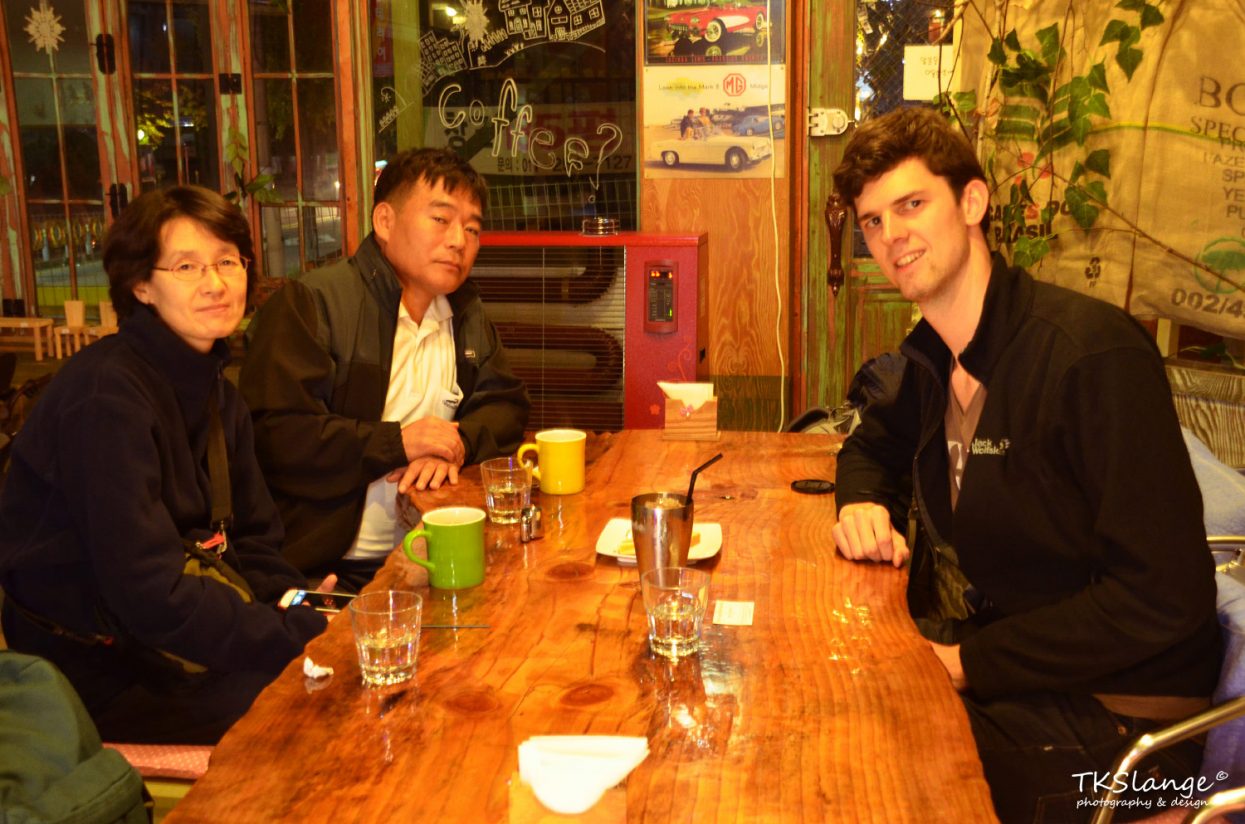 These very friendly Koreans helped me find a place to stay. Moreover, they invited me over for drinks and dinner and insisted on paying for my room. A great example of Korean hospitality.

And it did not end here. Since it was already quite late and I hadn’t eating anything yet they invited me over for dinner and some more drinks. I joined them in a cab and we headed to the city centre. Before going to a restaurant there was one thing they had to show me: Gaetbae, a small hand-operated ferry. Since this ferry starred in a popular Korean drama show it has become a popular tourist attraction and perhaps one of the few interesting sights of Sokcho. After a short return trip on the ferry (of course I had help pull the ferry) we went for a restaurant. Unfortunately it was already so late that most restaurants were closing, so at the first restaurant we sat down we were only allowed to get one last drink. At the next restaurant fortunately the kitchen was still open. After a decent dinner (and burning my mouth on a flaming hot sausage) and some beers we headed back to the motel.

Back at the motel I headed straight to bed to get some good sleep for my long day in Seoraksan NP the next day. More about this in my next blog!