So here’s Part 4, describing Day 3 of my trip. This time I spent a full day in Seoul to visit the royal palaces, Insadong and finish the day at the Seoul N Tower at Namsan.

Early in the morning I took the subway to City Hall. I had decided to take another quick peak at Deoskugung Palace, since I had only been there at night. As I expected it was much more crowded than at night and I therefore would recommend anybody to go visit Deoksugung at night. One reason to go there during the day is to watch the changing of the guards ceremony at the entrance gate. Although I was there at 10:30 and the ceremony was supposed to be at 11:00, there was a small ceremony taking place. However, the performance wasn’t too impressive, so I wonder whether this was the real ceremony.

Deoksugung was originally an aristorcatic villa, but became a royal palace when King Seonjo moved in in 1593 because all other palaces were burned down during the Japanese invasion. It’s one of the smaller palaces in Seoul, containing living quarters, a large main hall and a tea pavilion. 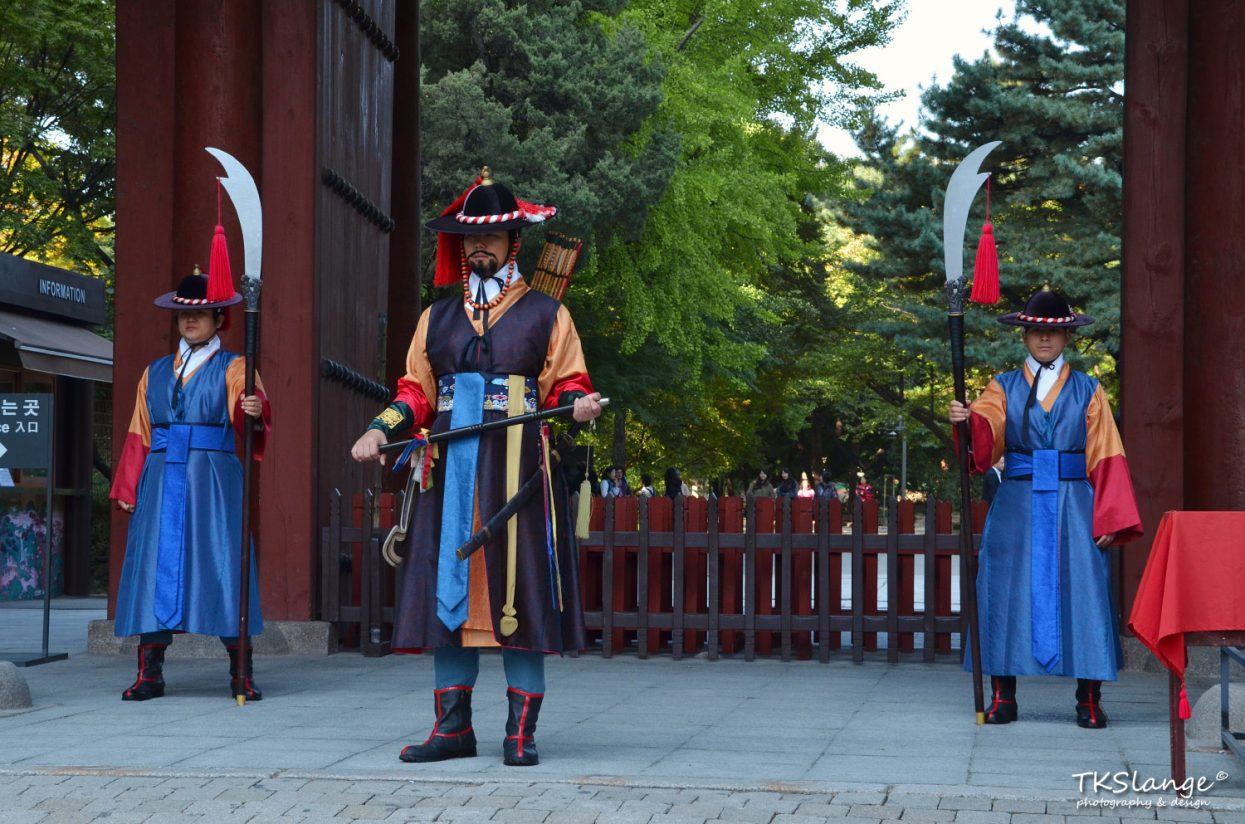 Royal Guards at the entrance gate of Deoksugung Palace.

Next up was Gyeongbokgung Palace. With a little rushing I arrived right in time for the 11 o’clock changing of the guards ceremony at the Gwanghwamun entrance gate. This ceremony was by far more impressive than what I had seen at Deoksugung, which could also be noticed by the huge crowd that had gathered in front of the gate.

Gyeongbokgung Palace is a royal palace originally built by King Taejo, founder of the Joseon Dynasty. The name means “Palace” (Gung) “Greatly Blessed by Heaven” (Gyeongbok). It was the main and largest palace of the Five Grand Palaces and served as the principal palace until 1592, when it was burned down during the Japanese invasions. It was rebuilt by Heungseon Daewon-gun in 1865, but most was destroyed again during the Japanese colonial rule. It is currently still under reconstruction.

TIP: A changing of the guards ceremony takes place at the Gwanghwamun entrance gate on every hour between 10:00 and 15:00. 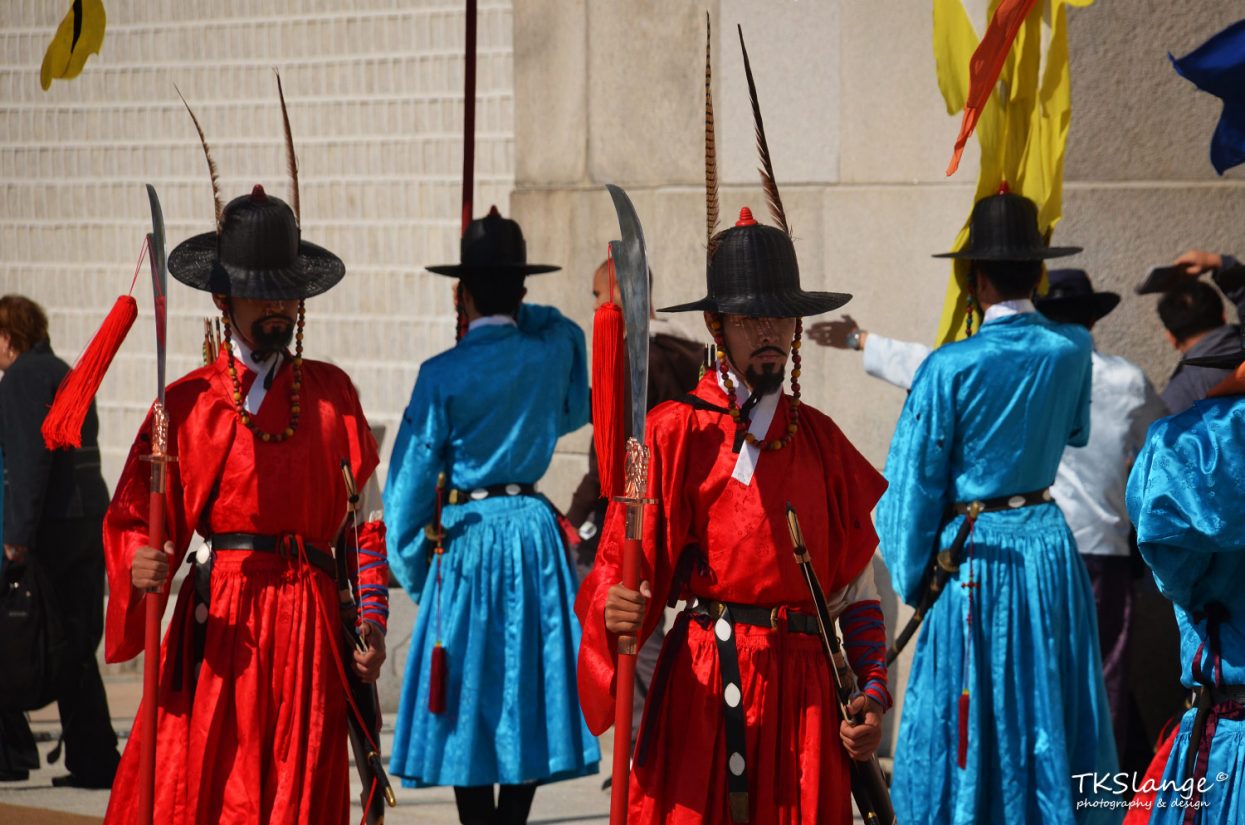 Changing of the guards ceremony at Gwanghwamun entrance gate of the Gyeongbokgung Palace. 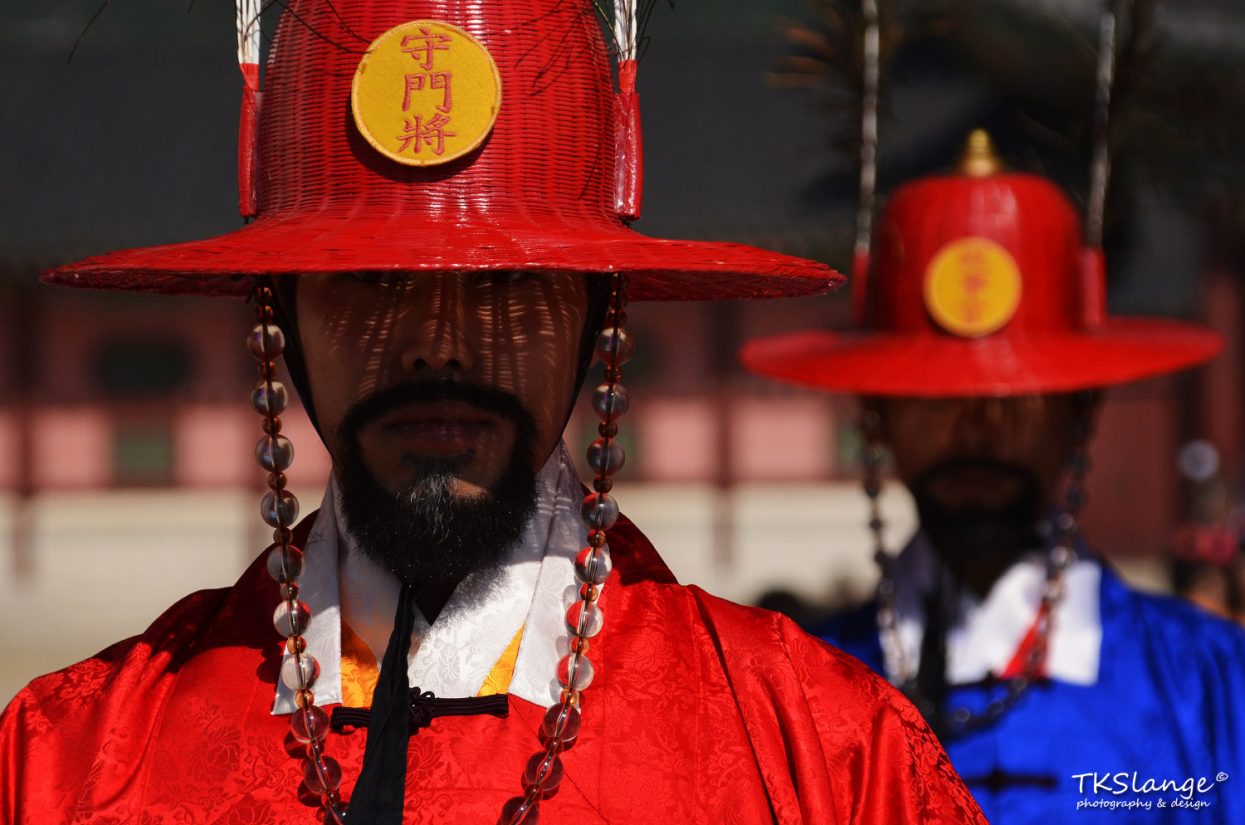 Royal Guards at the Gwanghwamun entrance gate of the Gyeongbokgung Palace.

After the ceremony I entered the palace and headed towards the first main architectural sight, the Geungjeonjeon, the main palace building where the kings were crowned. The huge two-story building was an impressive sight. 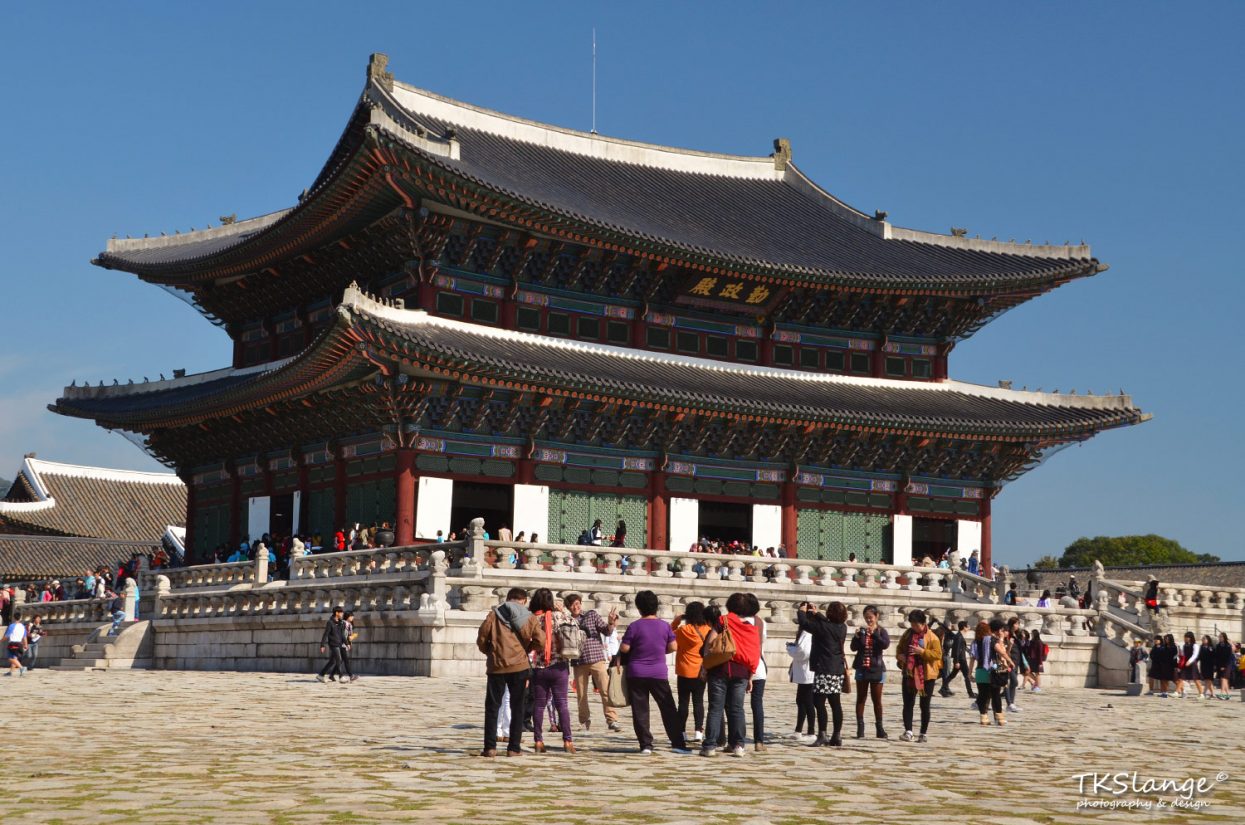 Geungjeonjeon, the main palace building where the kings were crowned.

However, I noticed that many Koreans found a two meter tall European a far more impressive sight. Especially kids were very interested in me and pretended to be taking interviews just to have a chat with me. Of course every interview was concluded with a picture. Fortunately the kids were not annoying, like in some other countries I have been, but merely amazed and remained very friendly and respectful. Apparently Koreans find me ‘very handsome’ or even that I ‘look like a model’ or a ‘celebrity’. I guess visiting Korea as a tall European could give you quite an ego boost.

When most of the kids were satisfied with my answers to their questions and the pictures with the ‘superstar’ I moved on towards the Gyeonghoeru, a large raised pavilion resting on 48 stone pillars and overlooking a large artificial lake. From thereon I walked towards the National Folk Museum past Hyangwonjeong, a pretty small hexagonal pavilion. The National Folk Museum (entry included in palace ticket) is definitely worth visiting. Modern displays show the history, culture and traditional lifestyle of Korea. You can easily spend over an hour at the musuem, but unfortunately my busy schedule didn’t allow me to stay longer. Through the living quarters I made my way back to the entrance of the palace. 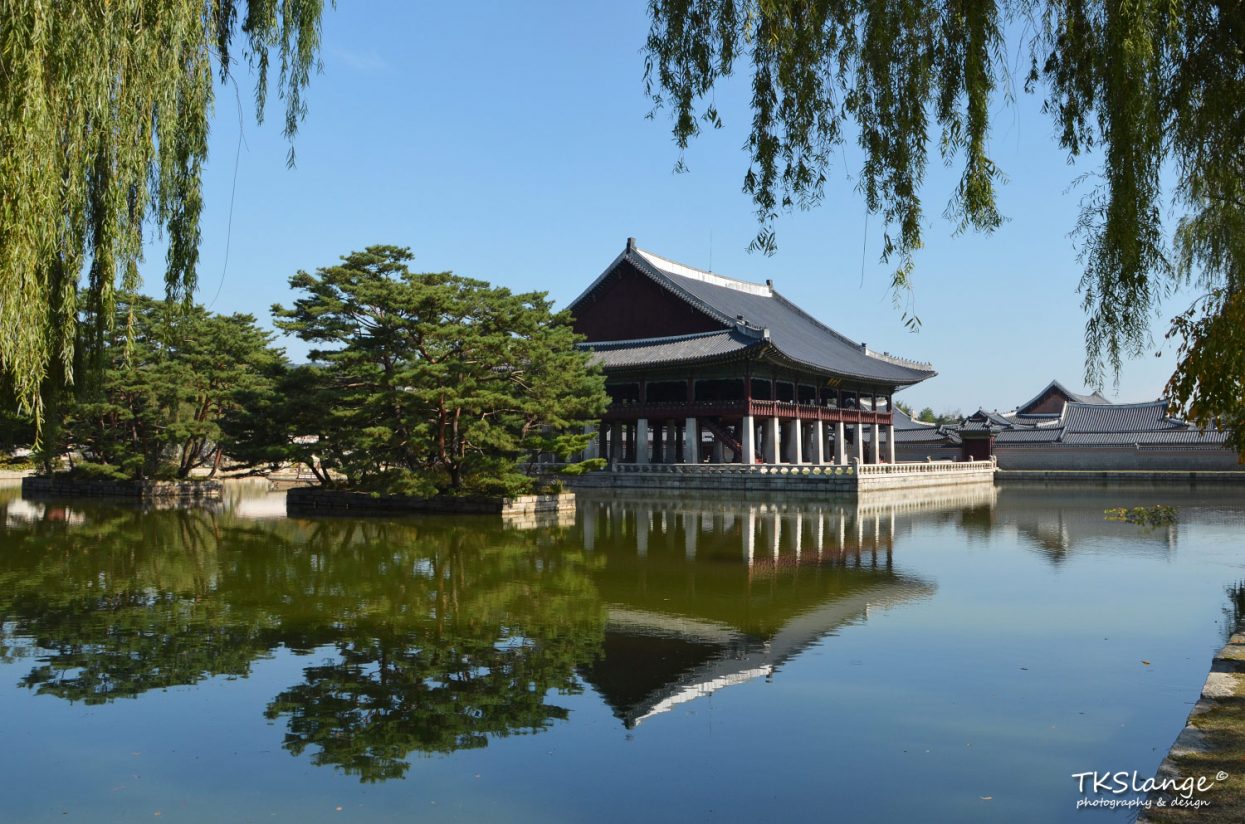 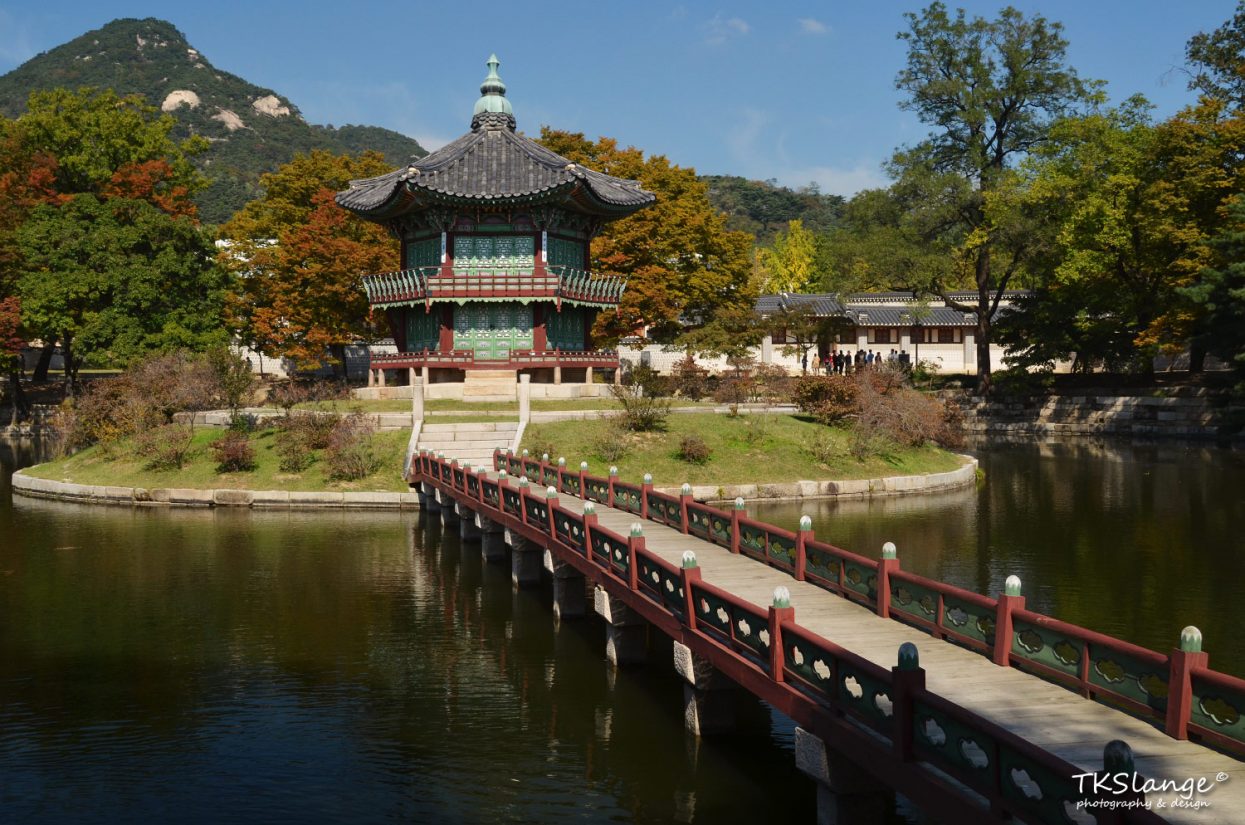 Hyangwonjeong, a pretty hexagonal pavilion in the back of the palace. 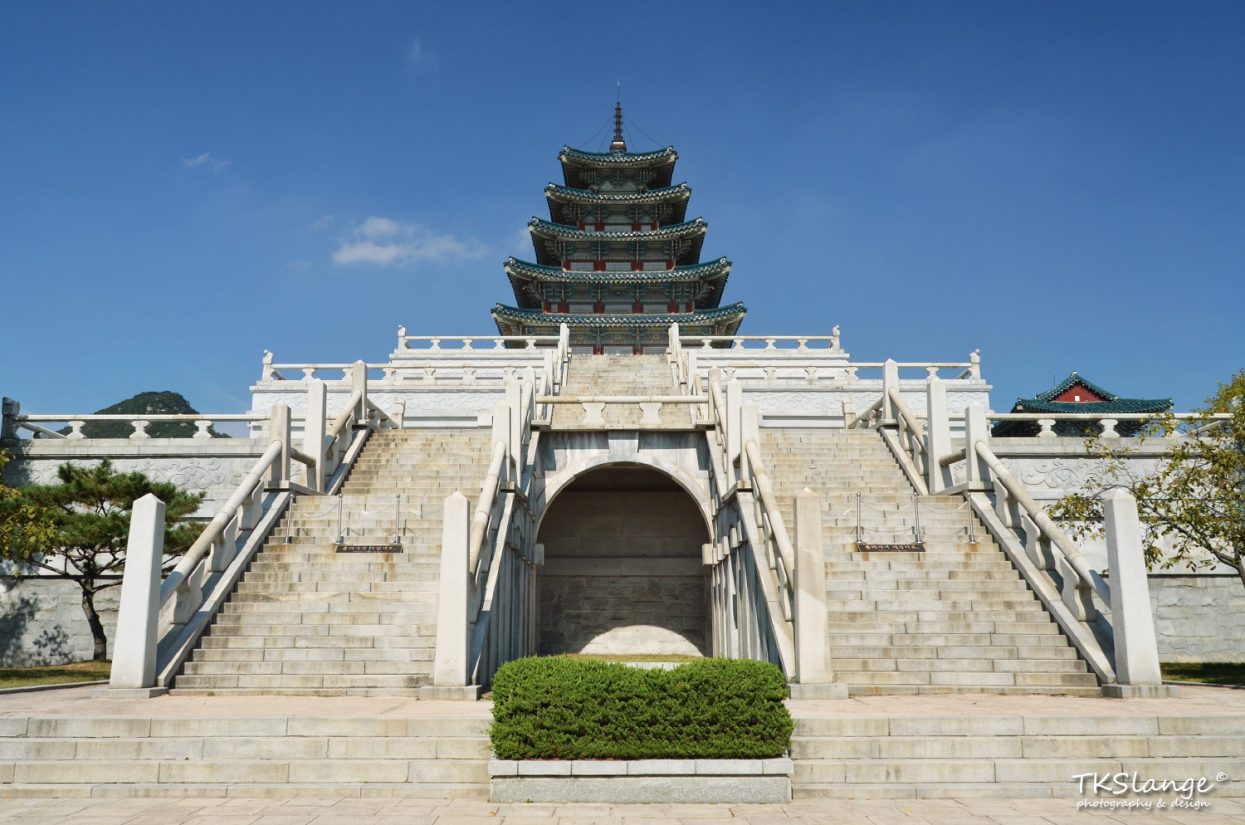 The five-storey pagoda on top of the National Folk Museum.

After a quick lunch break I walked towards the Insadong district. This small, compact neighbourhood is packed with art galleries, souvenir shops and traditional restaurants. A great place for shopping. However, I was more interested in the Jogyesa Temple, just outside the shopping area. Besides the beautiful Buddhist shrine and the giant locust tree towering above it, the area around the temple was beautifully decorated with real flowers. This gave the area a very happy and peaceful atmosphere.

The Jogyesa Temple contains the largest Buddhist shrine in Seoul, Daeungjeon. The building is beautifully decorated with murals of scenes from Buddha’s life and carved floral latticework doors. Inside sits a large golden Buddha. It is possible to do a temple stay at Jogyesa Temple.

Those who are interested might also want to take a look at the Bukchon Hanok village north of Insadong, but unfortunately this didn’t fit my program for the day. 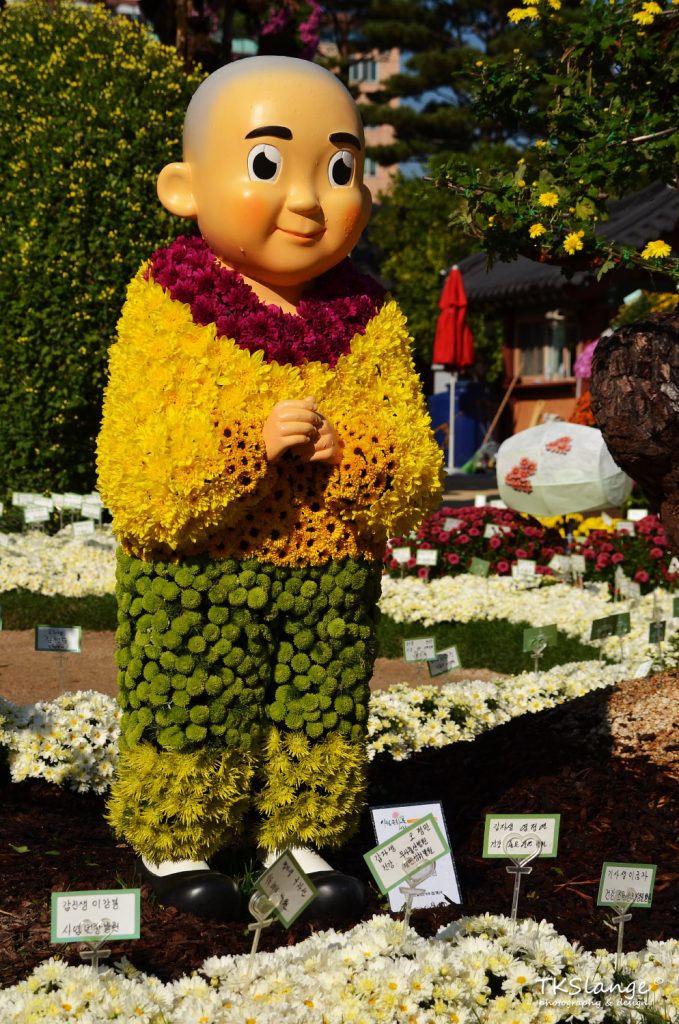 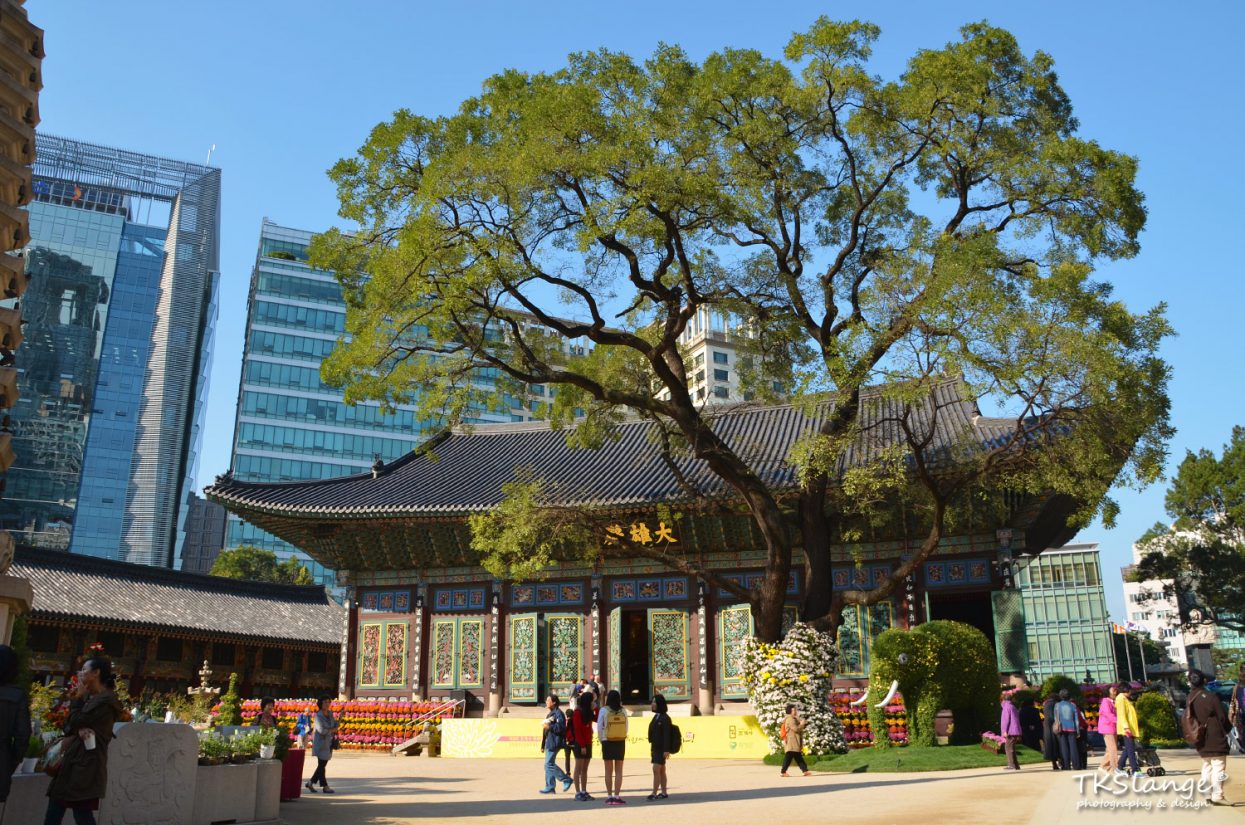 Daeungjeon, the beautiful Buddhist shrine and the giant locust tree towering above it. 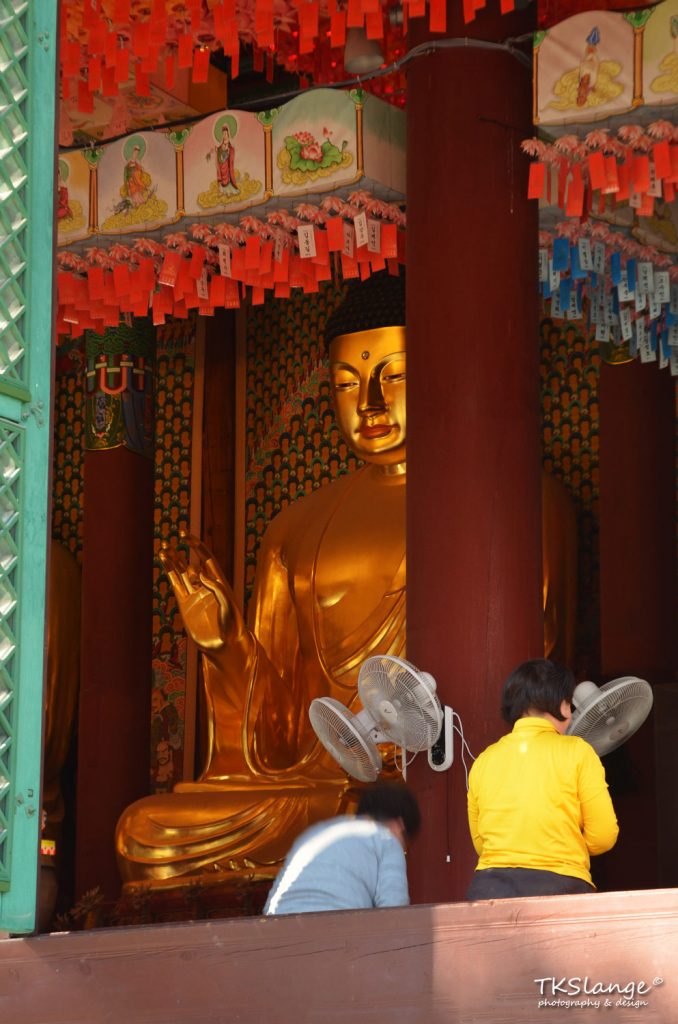 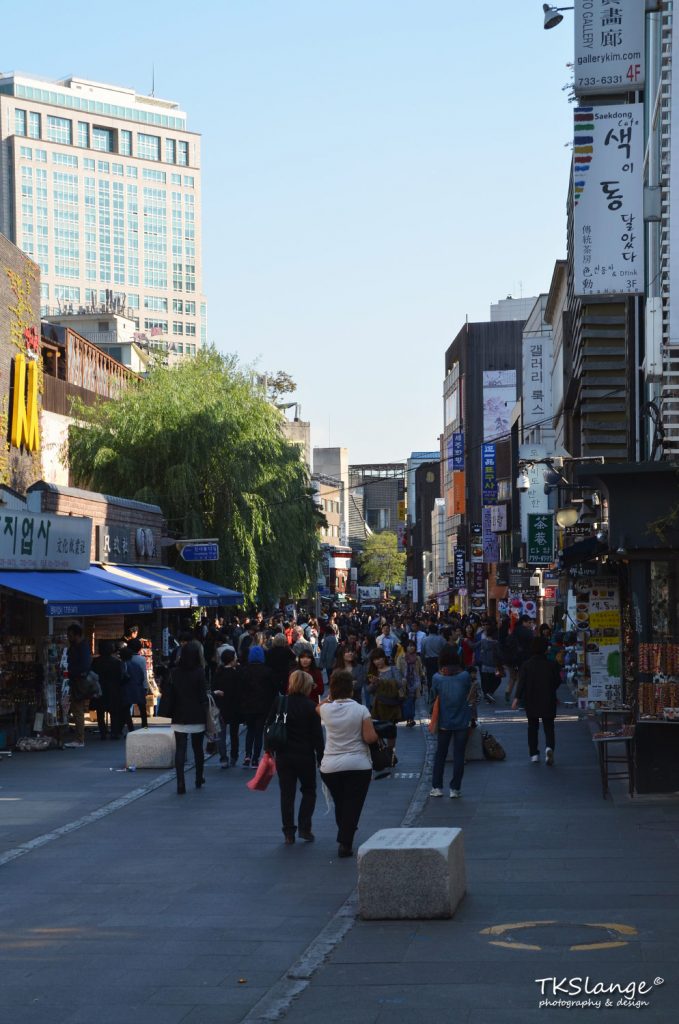 Galleries, souvenir shops and traditional restaurants at the Insadong district.

From the temple I walked through Insadonggil, Insadong’s main street, to the other end of the district and from thereon to the entrance of Jongmyo Shrine. In the Jongmyo Park I found a lot of elderly men playing games, sharing stories and doing caligraphy. Fortunately I arrived right in time at the entrance to join the (mandatory!) guided tour at 16:00. A lovely Korean lady guided us around the area, explaining about the Korean traditions in honouring their deceased kings and the huge amount of spirit tablets inside the many rooms of the shrine.

Surrounded by dense woodland are the impressive buildings of the Jongmyo Shrine, which house the spirit tablets of the Joseon kings and queens. Their spirits are believed to reside in a special hole bored into the wooden tablets. One of the many unique characteristics of Jongmyo Shrine is the 3-forked path of slightly raised roads that starts from in front of the main gate. The middle path is in honour of kings of the past and leads to Jeongjeon, where mortuary tablets of kings are preserved and memorial services are held. The east road of the shrine’s forked path is for the living king and the west is for the living prince. 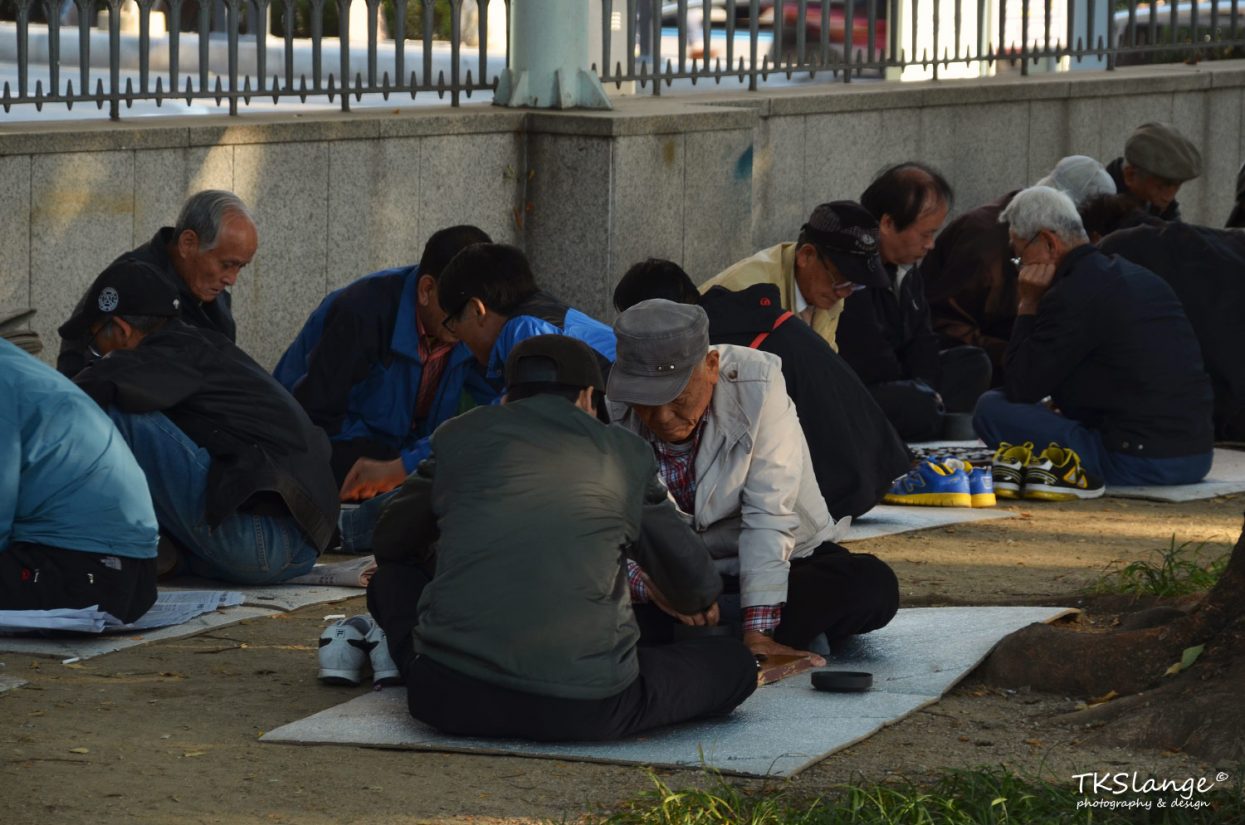 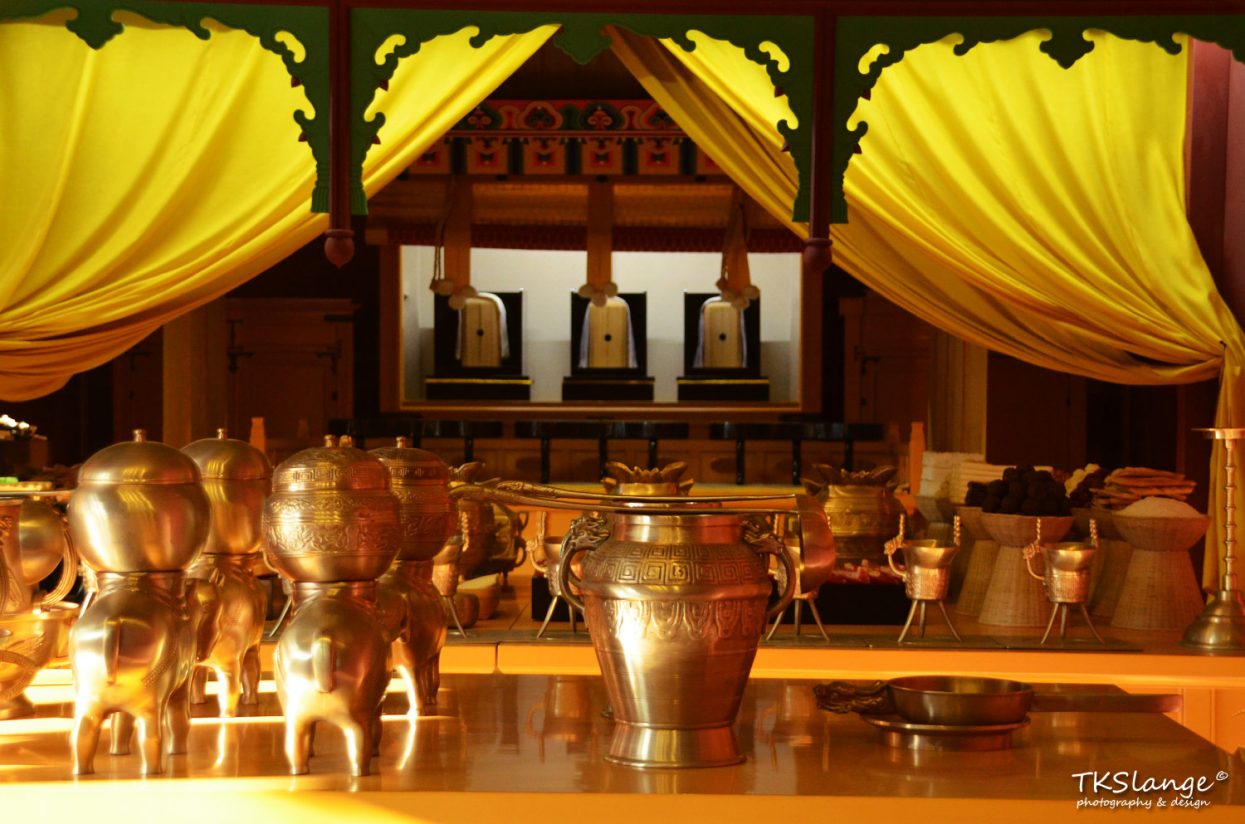 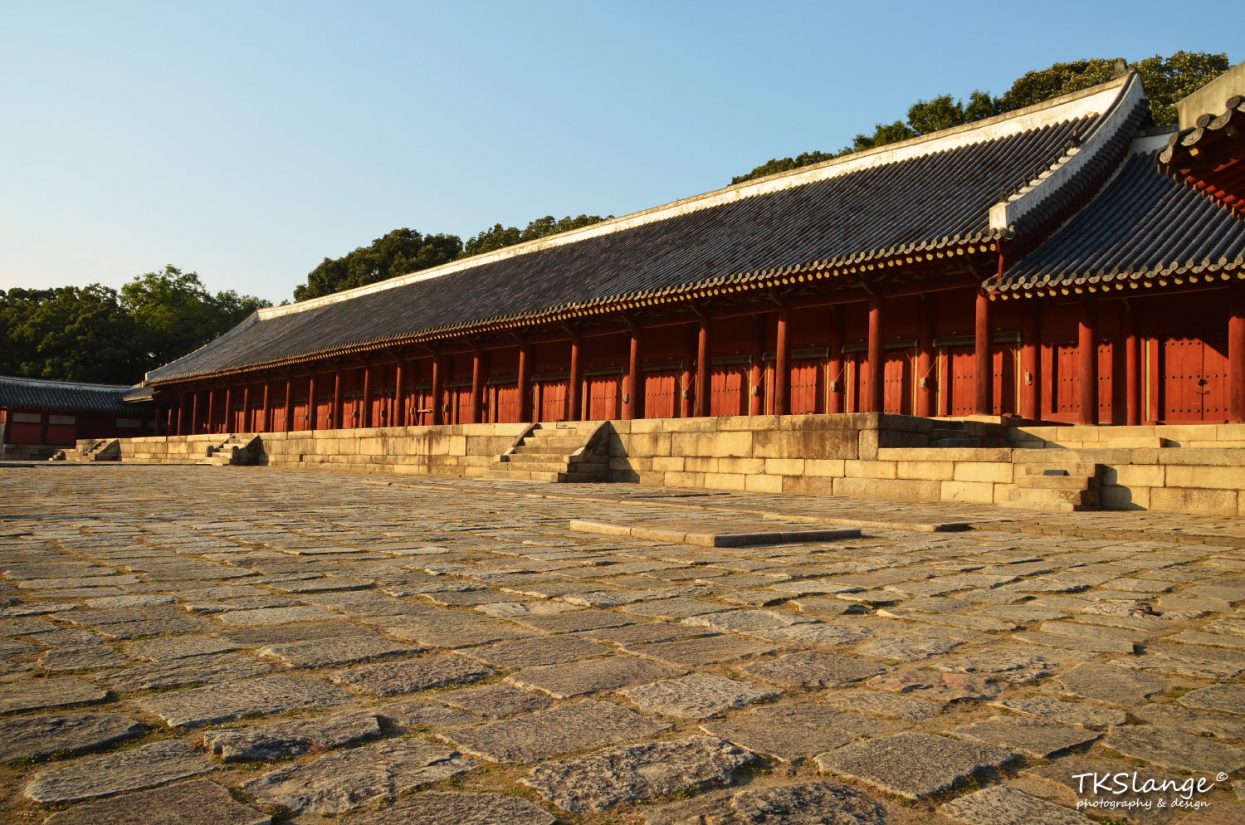 The shrine of 19 rooms containing the spirit tablets.

From Jongmyo I rushed my way to Seoul Station to start my hike described in my Lonely Planet through Namsan Park up to Seoul N Tower before the sun would set. Finding my way to the park from the station exit was a bit tricky, but finally I made it just in time for the sunset. From the lower parts of the park I was able to see the sun drop behind the tall city buildings with a beautiful orange glow. Somewhere higher up the mountain I set up my tripod on a viewing platform and waited for the darkness to come and the city lights to turn on. Slow but steadily the city started to glow, resulting in some great night shots.

Sunset at the lower parts Namsan Park. In the front is a renovated part of the city’s defence wall. 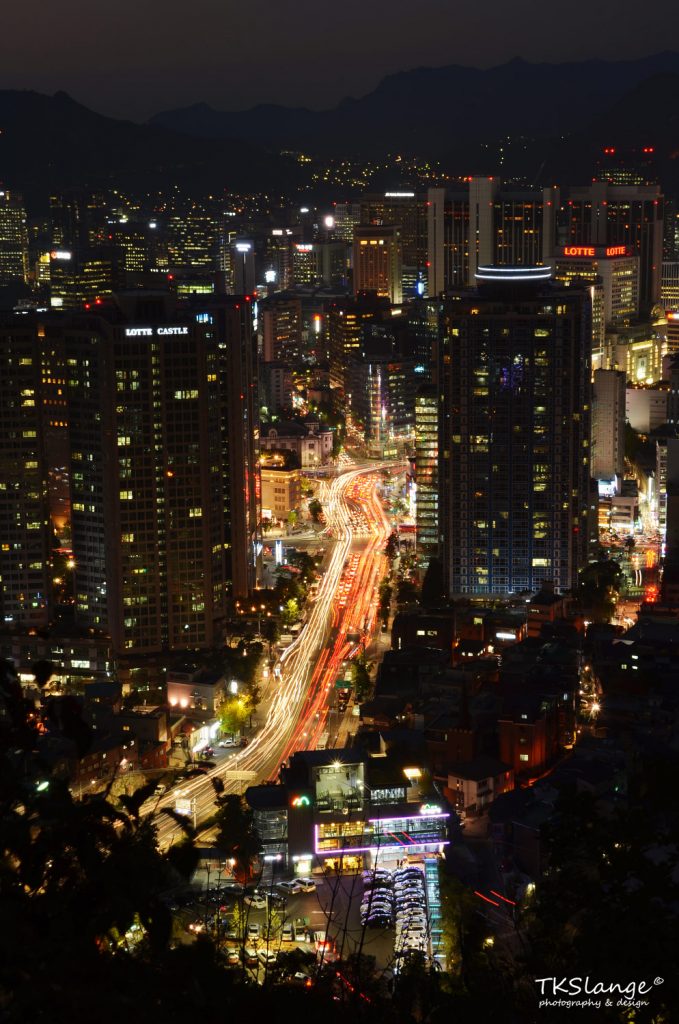 The streets light up at night.

The city glows after sunset.

Once I was satisfied with my shots I hiked the last bit up towards the summit and the Seoul N Tower. At the bottom of the tower I noticed that about 90% of the people around me consisted of young couples who were on a date. Apparently the Seoul N Tower is thé place to take your girlfriend. On a viewing deck below the tower people attach padlocks to the fence to ‘lock their eternal love’. Although this was all way to cheesy for me and I felt a bit uncomfortable around all these couples, I decided to join the flow of young lovers and take the elevator with them to the observatory deck up in the tower. However, after a few minutes up in the tower and shooting some nice pictures, all this love in the air became a little too much for me and I took the elevator back down to get some fresh air. The 360 degrees panoramic view was amazing though. At the bottom of the tower I enjoyed a nice kimchi hotdog. Alone, on a quiet bench.

The Seoul N Tower opened to the public on October 15, 1980 and has since become a major tourist attraction. The 236.7m Seoul N Tower sits atop Namsan Mountain (243m) and offers panoramic views of Seoul and the surrounding areas. The view is so stunning that many consider Seoul N Tower the best tower in Asia. An elevator takes you up to the observatory deck in 25 seconds. 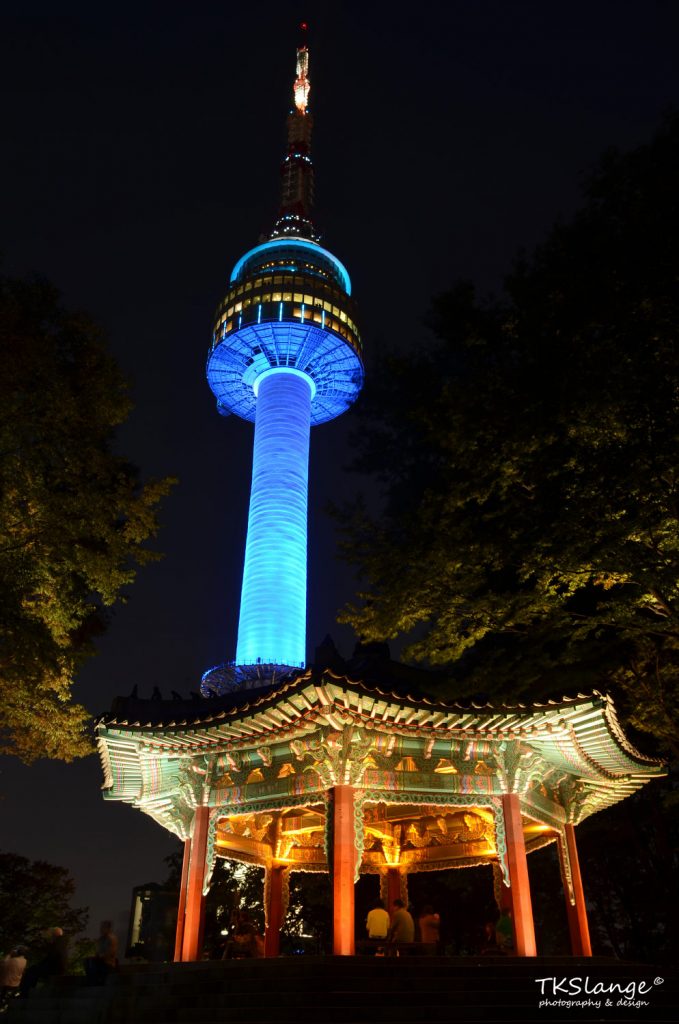 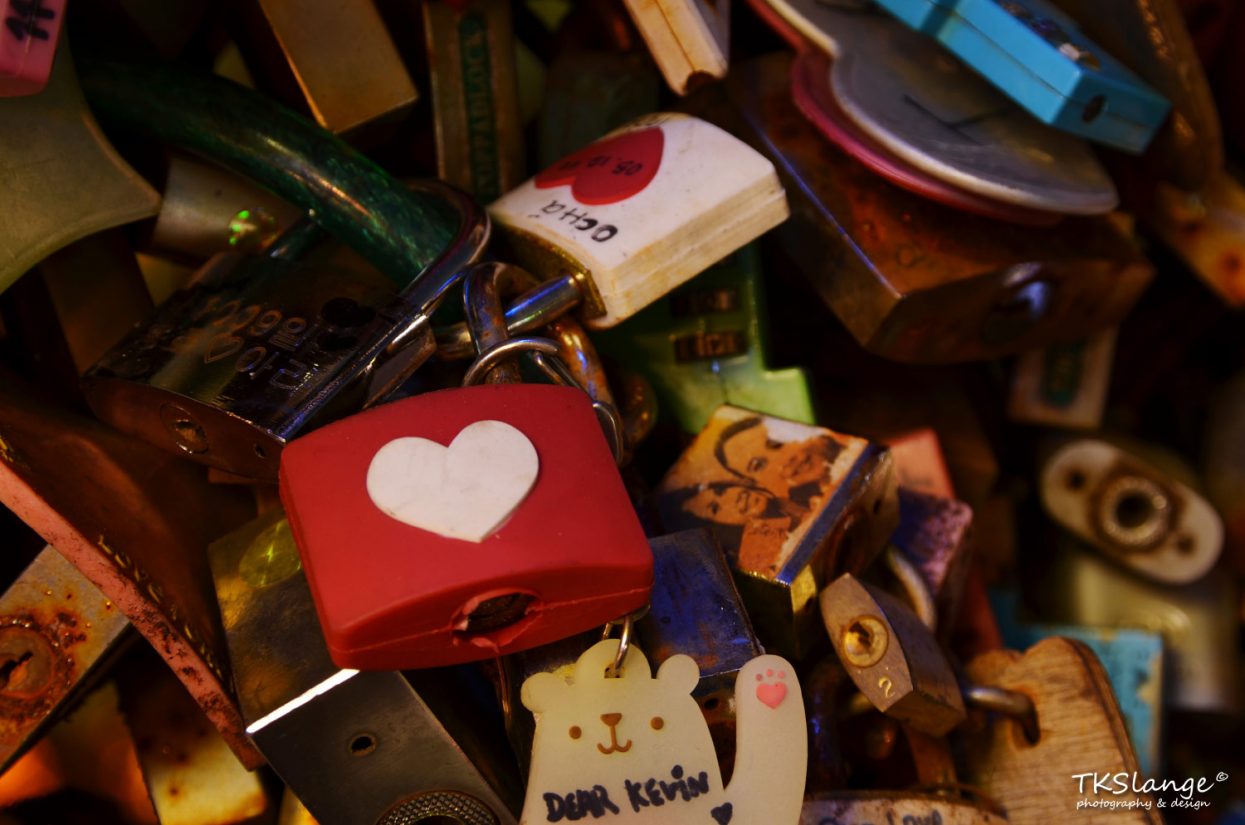 Young couples ‘lock their love’ at the fence of the viewing platform. 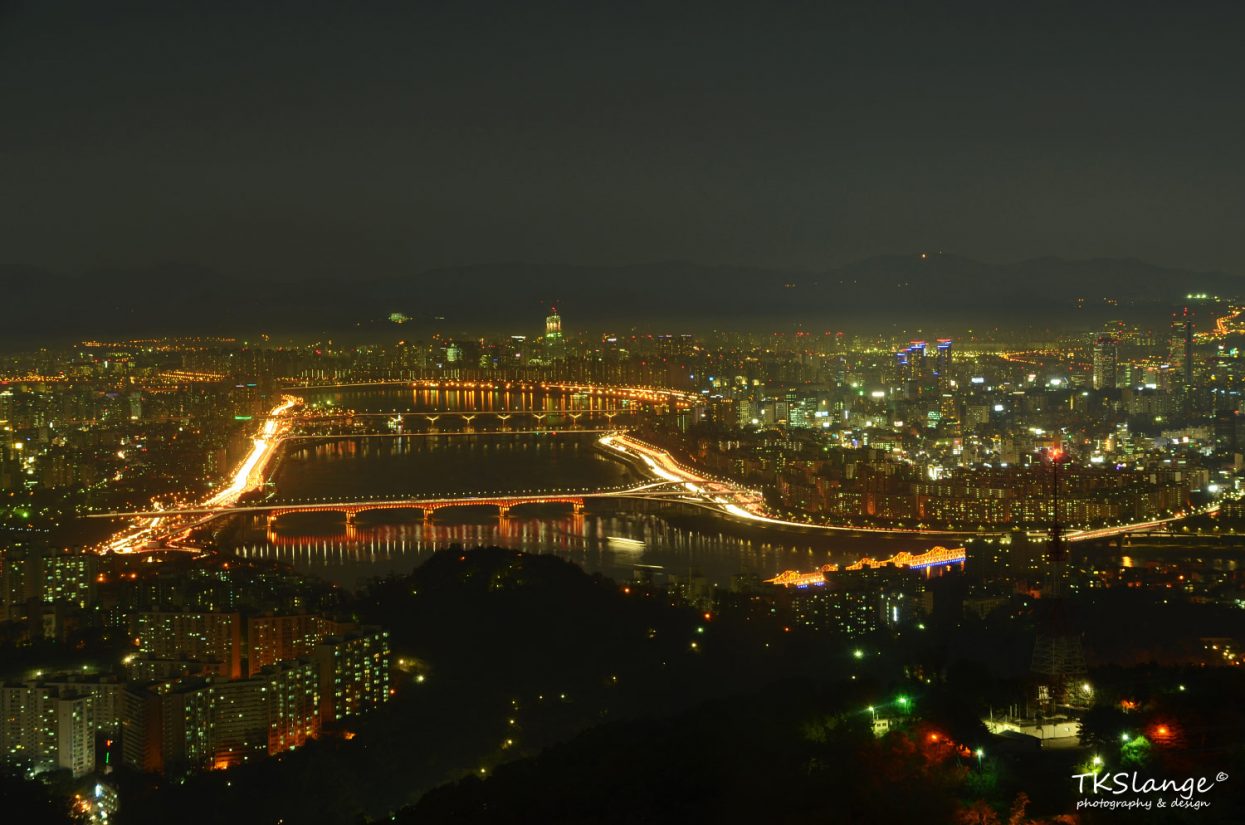 The view over the Han River from the observatory deck up in the Seoul N Tower.

In my next blog it’s time to leave the big city of Seoul and head towards Seoraksan National Park. Stay tuned!