So here’s part 2 of the blog on my Korea Autumn Trip. From now on I will be discussing the things I did during my trip on a pretty much daily basis, so expect approximately another 15 blogs.

On Tuesday October 15, 2013 I took my KLM flight from Amsterdam to Seoul. A long 10,5 hour journey on board of a Boeing 747-400. Fortunately it was a night flight and I managed to catch some (read: very little) sleep. At 10:50 my flight arrived on time at Incheon International Airport. The first thing I noticed was that reading the Korean script (Hangul) was really impossible for me. Although I was of course well aware of this in advance I suddenly felt like I was in a completely different world. So far I had never in my life not been able to read something (understanding is something else…). Fortunately signs at the airport were also in English. As soon as I had received my luggage I made my way to the Arex Airport Express train, but not before buying a T-money card. This was one of the many useful tips from my friend.

T-money is a rechargeable prepaid card that can be used to pay for public transport in and around Seoul and some other parts of Korea. Using this card instead of cash gives you a 100 KRW discount per fare and allows you to transfer between subway or bus lines without extra costs. It can also be used instead of a credit or debit card at most convenience stores. You can buy your T-money card or recharge it at stations, banks and convenience stores. T-money can be refunded, but some fee applies.

The Arex Airport Express train is perhaps the easiest and most comfortable way of making your way from Incheon International Airport to Seoul. The train takes about 50 minutes to get to Seoul Station and makes a few stops on the way. There also is an actual ‘express’ train, which goes to Seoul Station directly (43 min). A single journey costs about 4.000 KRW.

The Arex express took me to Hongik University Station. At a 10 minute walk from the station was Lee & No Guesthouse, my home for the comming days. Tucked away in the narrow streets of the Hongdae area. Fortunately I had printed a detailed map with directions provided by the hostel. There was no host around when I arrived, but my bed was ready and there were instructions on how to get the access code for the main gate.

Lee & No Guesthouse is nice and cosy guesthouse in a quiet neighbourhood. The guesthouse has 4 small dormitory/private rooms. There’s a small common living room with two computers with free internet. Emily, the hostess, is extremely friendly and is eager to help you if you have any questions. In the morning she prepares a breakfast for the guests. If you want to get away from the busy streets of Seoul for a few hours the quiet garden with a small fountain is perfect. The guesthouse is located in the Hongdae area, which is filled with restaurants, bars and clubs. It’s known for its vibrant nightlife and urban art.

After unpacking, taking a shower and a quick nap I took the subway to the city centre, a ride of about 20 min. I didn’t have a real plan but decided to just stroll around the city centre. I found my way to the Korea Tourism Organisation office from the Euljiro-1-ga station. I recommend going here if you still have lots of questions. There’s very friendly English speaking staff and they can help you with all your questions about Seoul and the rest of Korea. From the KTO office I walked along Cheonggye stream towards Sejongo, one of the main streets of the city centre. Here I ran in to the Bigak pavilion. This building in traditional Korean style was my first introduction to the rich history of Seoul. The combination of historical sites among the enormous modern buildings and dynamic traffic is one of the things that appealed most to me about Seoul. 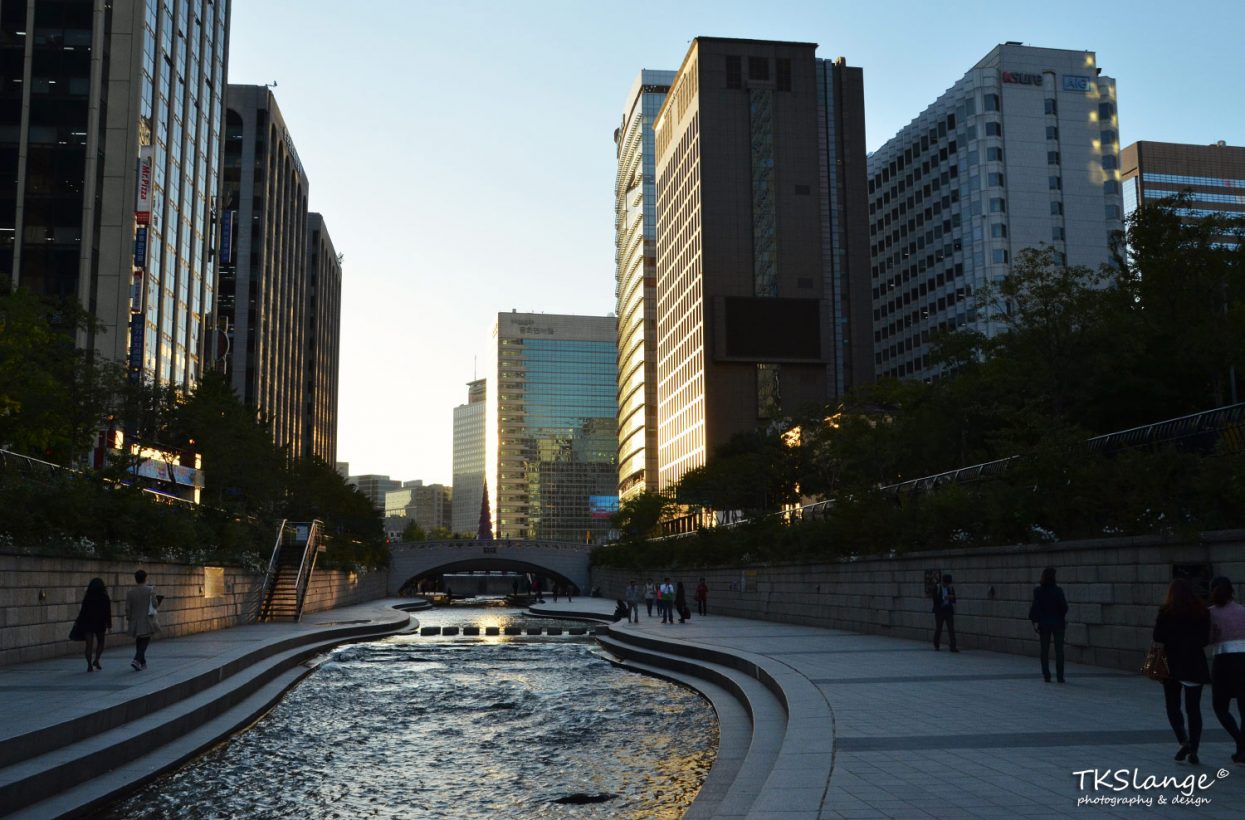 The Cheonggye Stream runs through the tall buildings of the centre of Seoul. 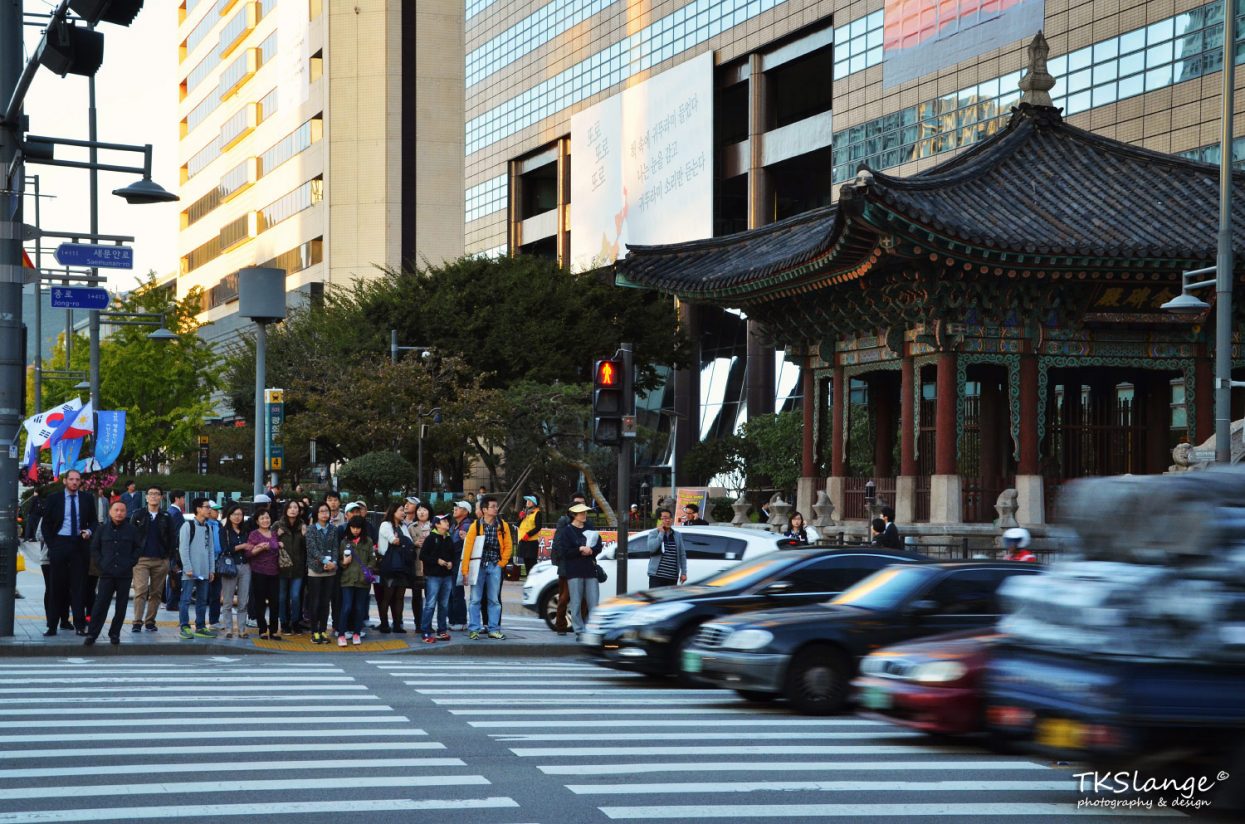 The Bigak Pavilion along one of the busiest streets of Seoul.

From Bigak I walked along Sejongo towards the Gyeongbokgung palace. At this time the sun had started to set, resulting in some great pictures of Gwanghwamun, the impressive south entrance gate of the palace. Since the palace was already closed (guided night tours are available during a short period in October), I made my way back along Sejongo.

Gwanghwamun, the south entrance gate of the Gyeongbokgung Palace. 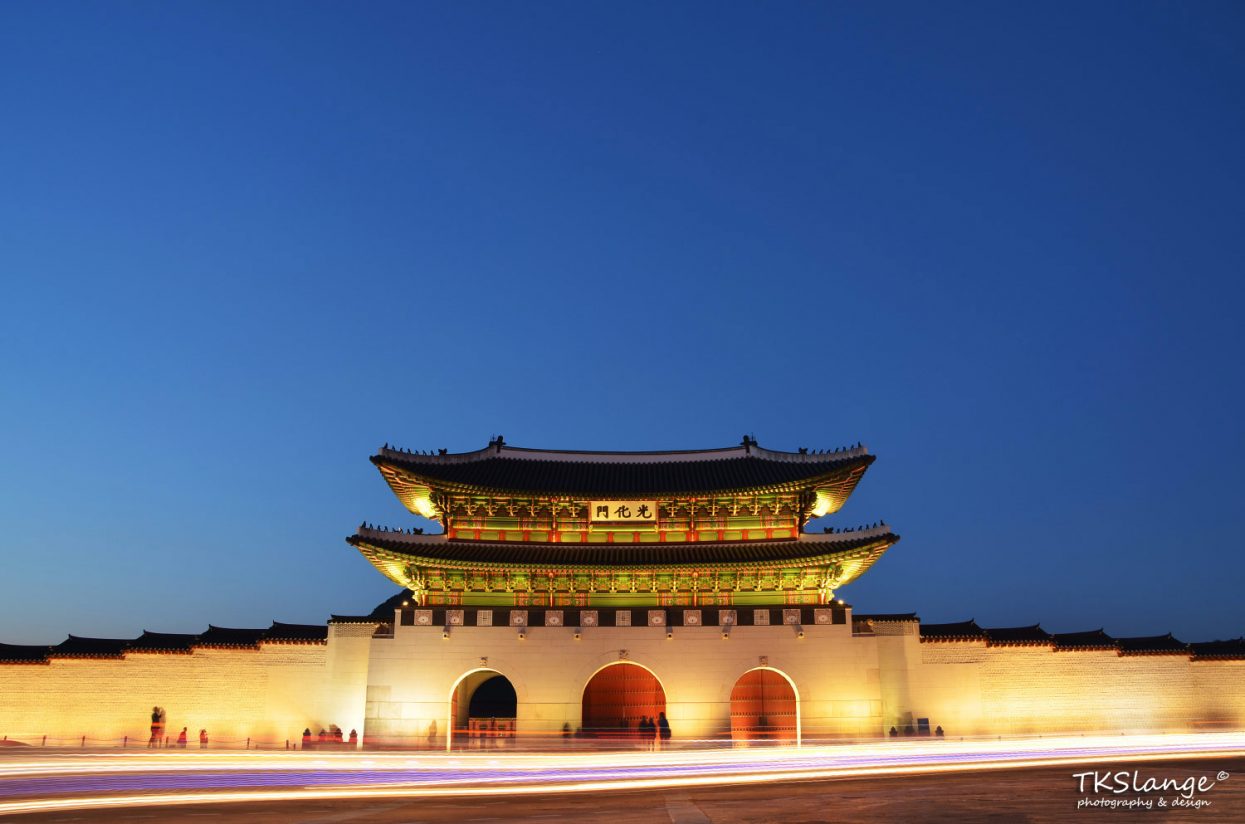 Gwanghwamun, the south entrance gate of the Gyeongbokgung Palace.

Along Sejongo I walked towards City Hall, passing along the big Sejong Centre for the Performing Arts, the statue of King Sejong the Great of Joseon, the statue of Admiral Yi Sun-sin of Joseon and Bigak pavilion again. Although the sun had completely set and the sky had turned dark I noticed the city was actually waking up now. Streets became filled with people and big neon signs lit up every corner of the street. 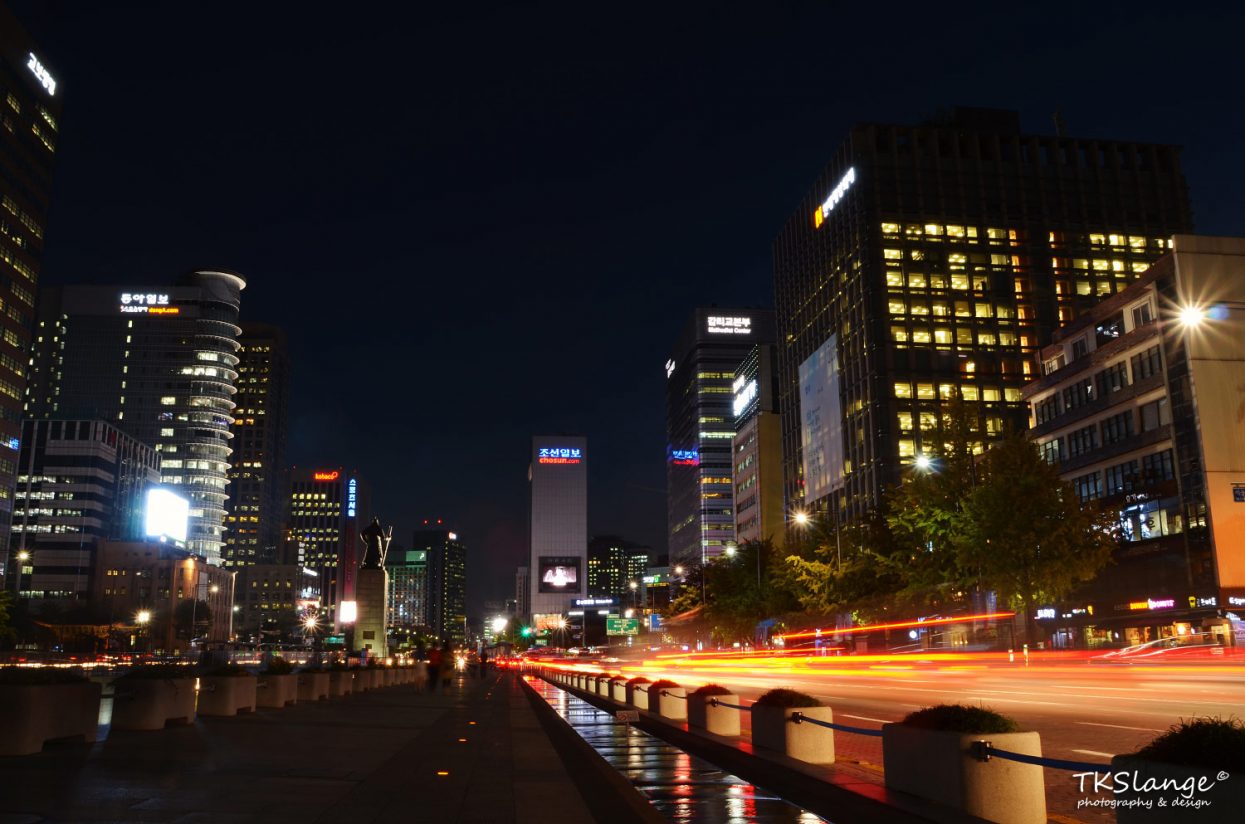 Sejongo Boulevard at night. On the left the statue of Admiral Yi Sun-sin of Joseon. 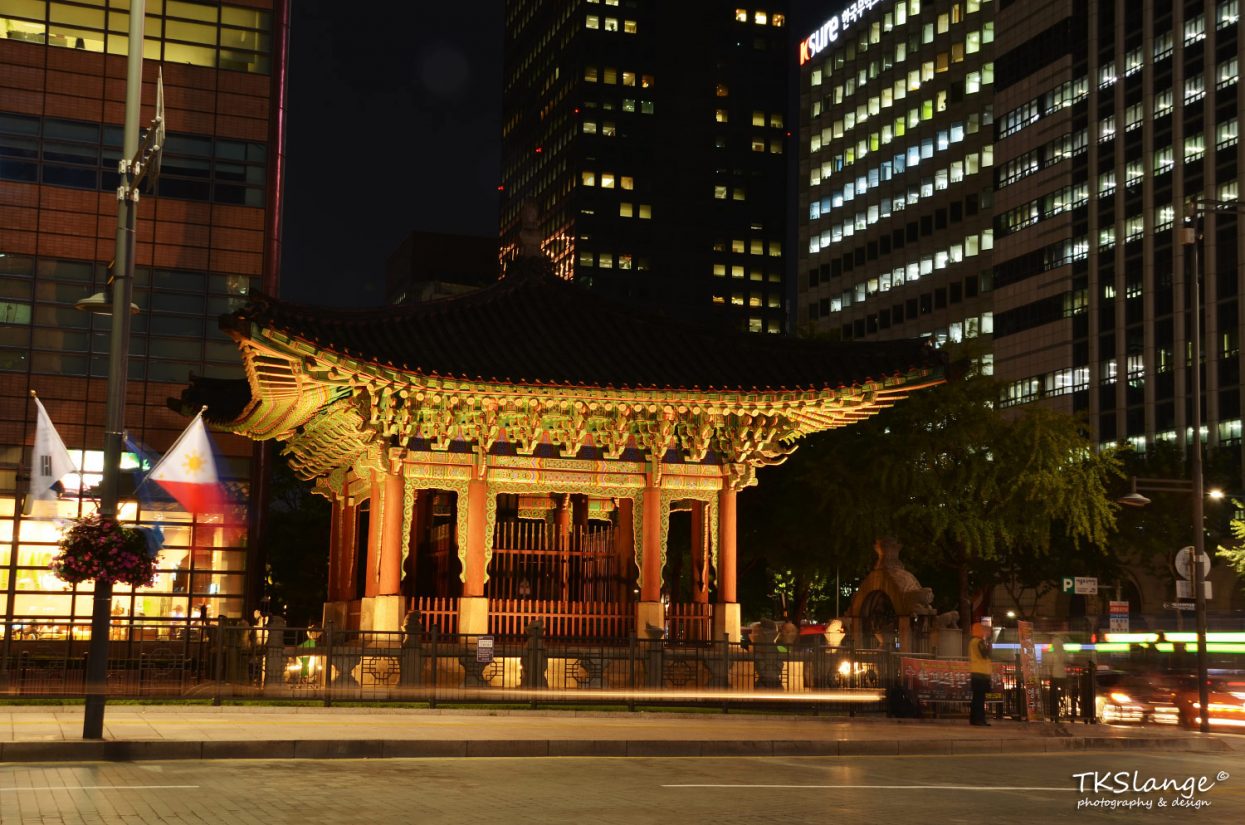 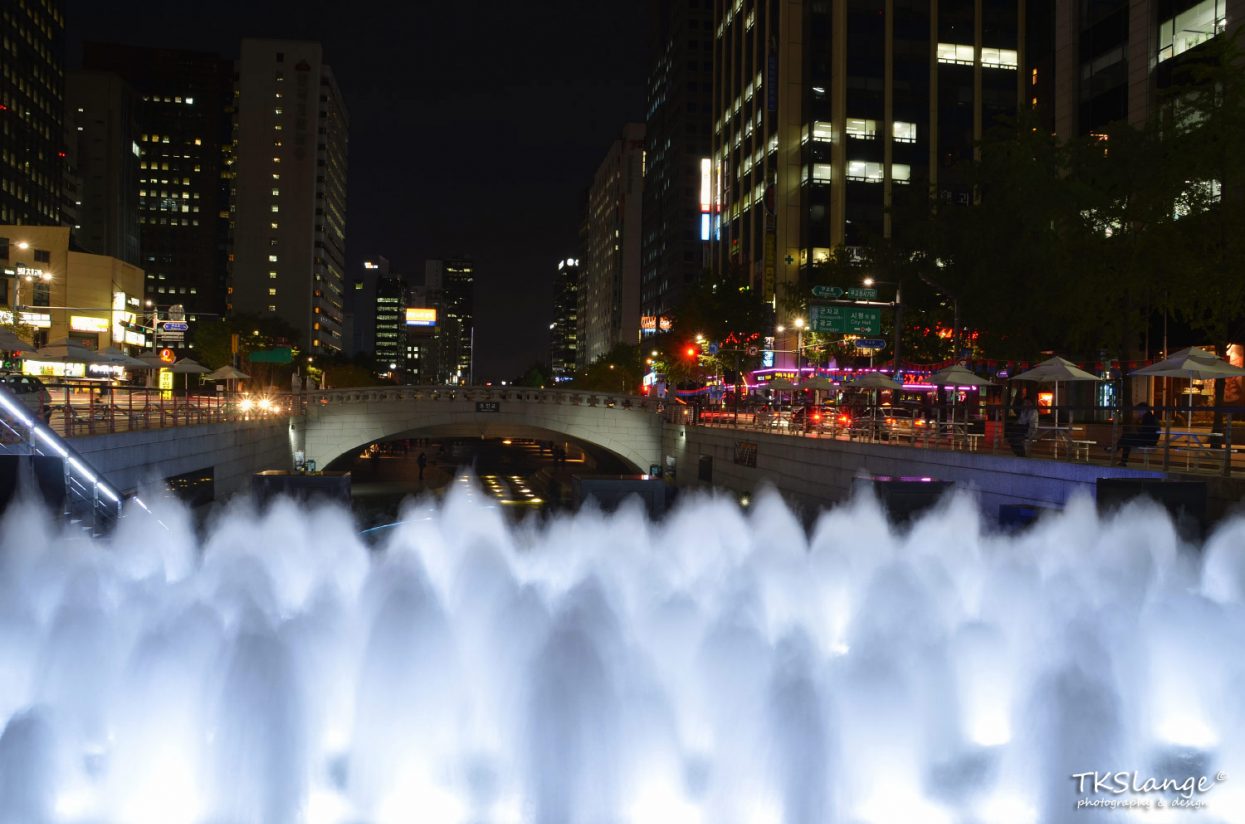 A few hundred metres further I arrived at Seoul Plaza. To the north of this park lies Seoul’s modern City Hall and the Seoul Metropolitan Library. Because of the interesting architecture I decided to take a closer look at the City Hall and I found out that there was a lot of art in and around the building. Since it was already quite late I decided not to go inside, but cross Seoul Plaza instead and head towards Deoksugung Palace. 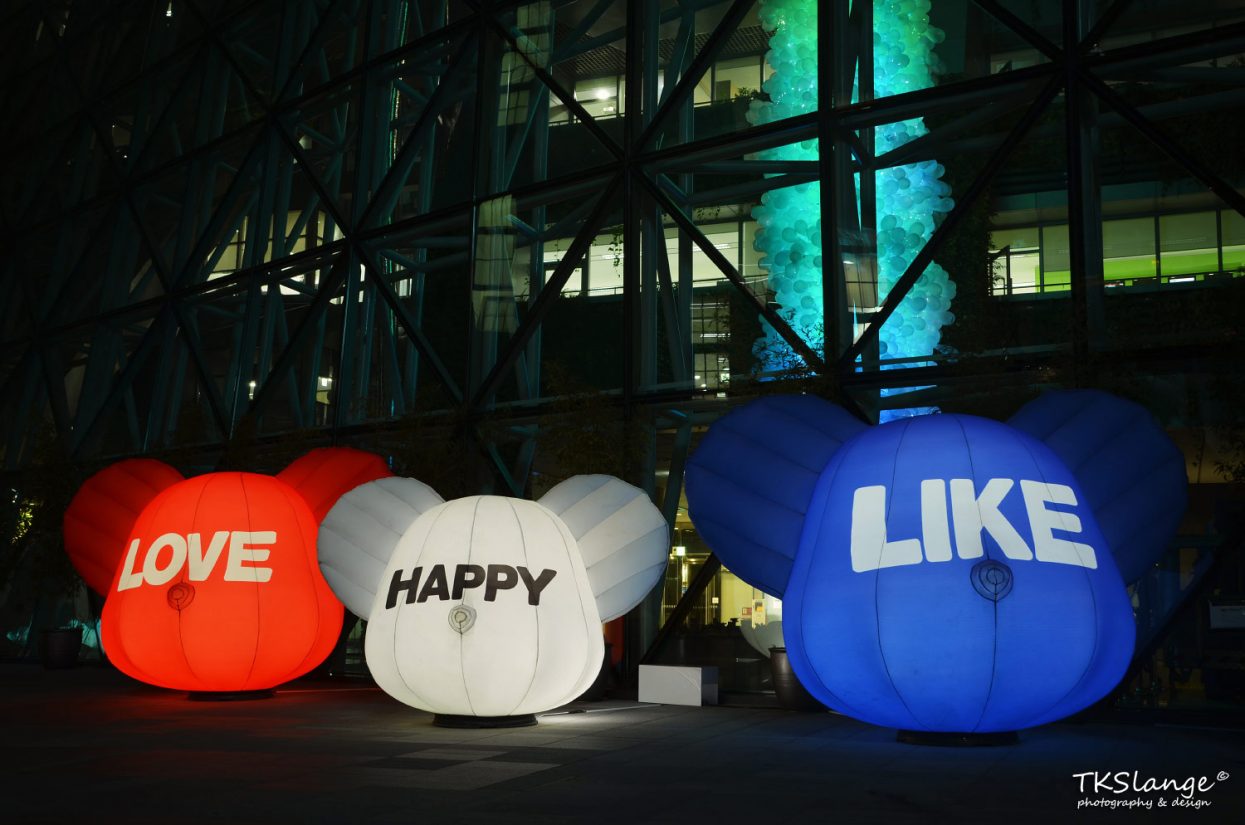 The Deoksugung Palace was open until 21:00, so this gave me a nice opportunity to take some night shots at the palace. Quit beautiful. Another big advantage was that there were nearly no other visitors around.

Deoksugung was originally an aristorcatic villa, but became a royal palace when King Seonjo moved in in 1593 because all other palaces were burned down during the Japanese invasion. It’s one of the smaller palaces in Seoul, containing living quarters, a large main hall and a tea pavilion. 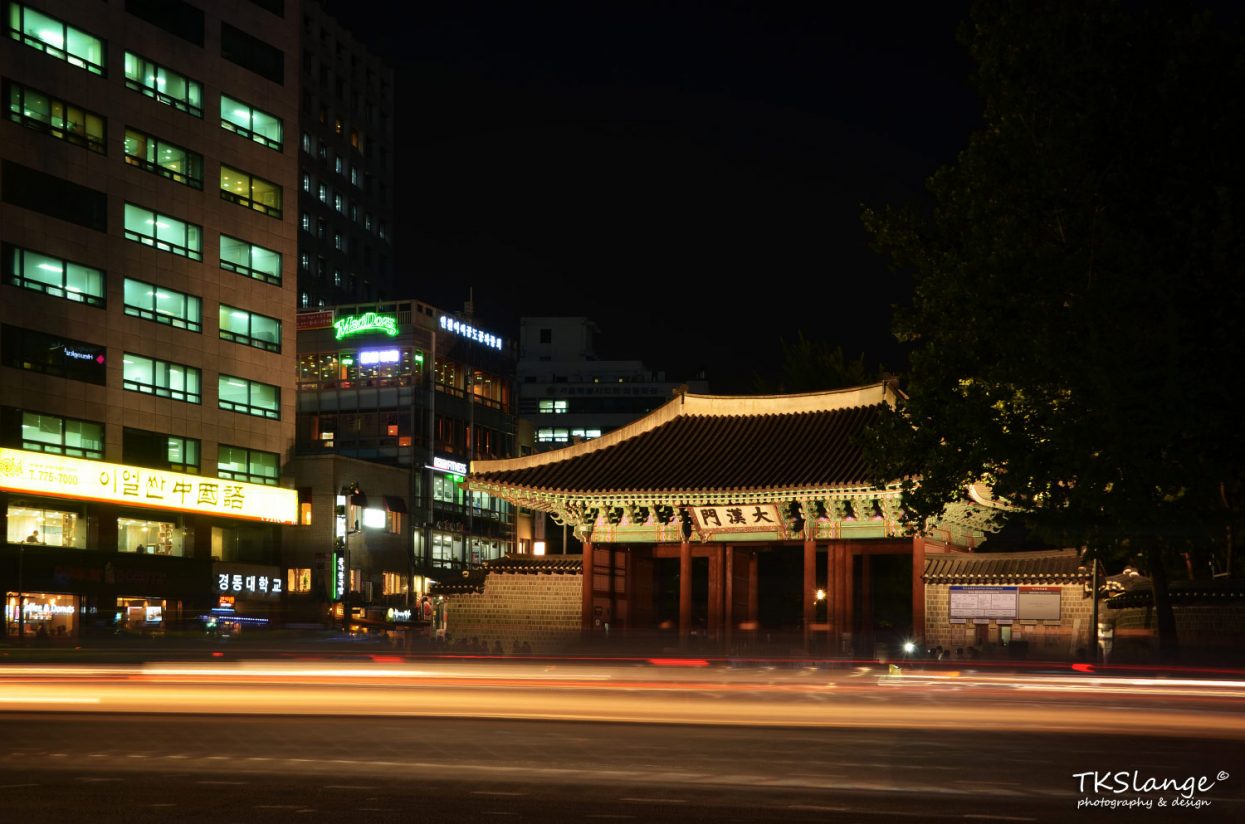 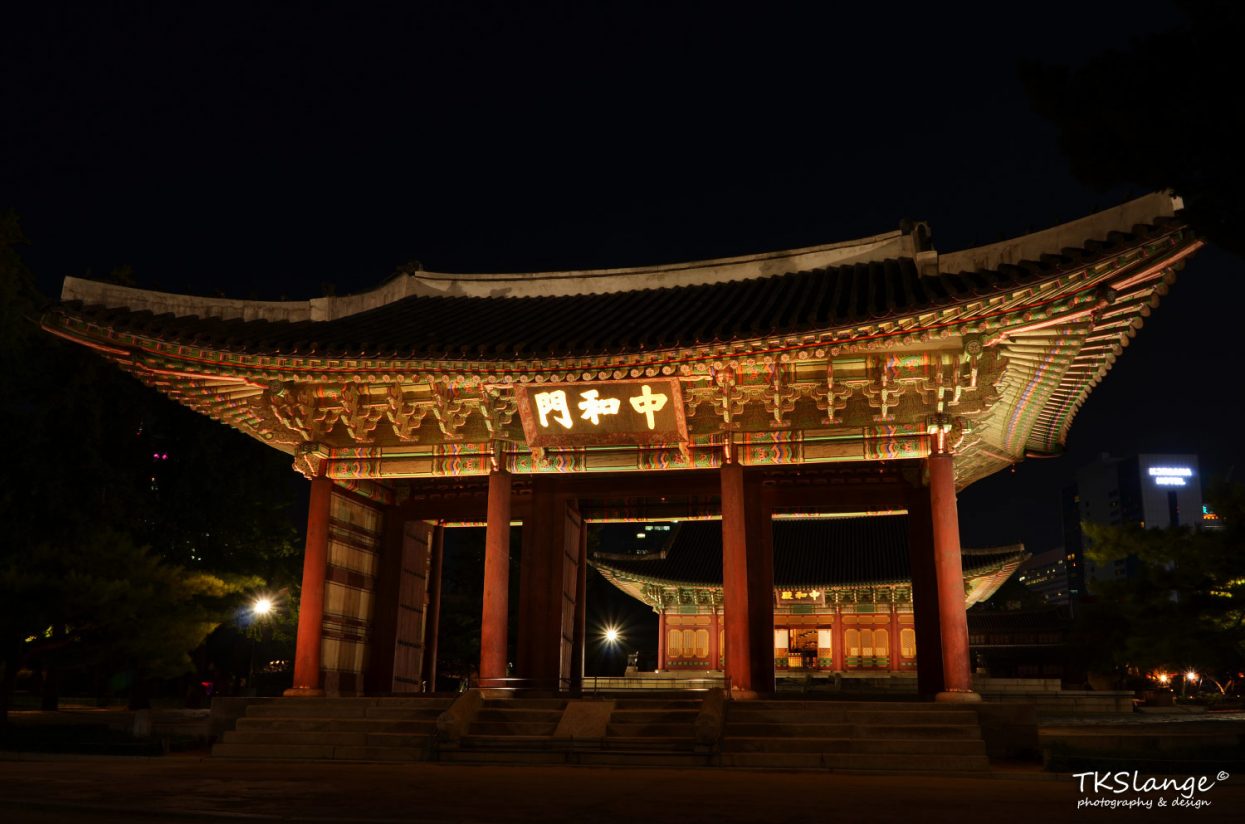 Entrance to the main square of Deoksugung Palace. 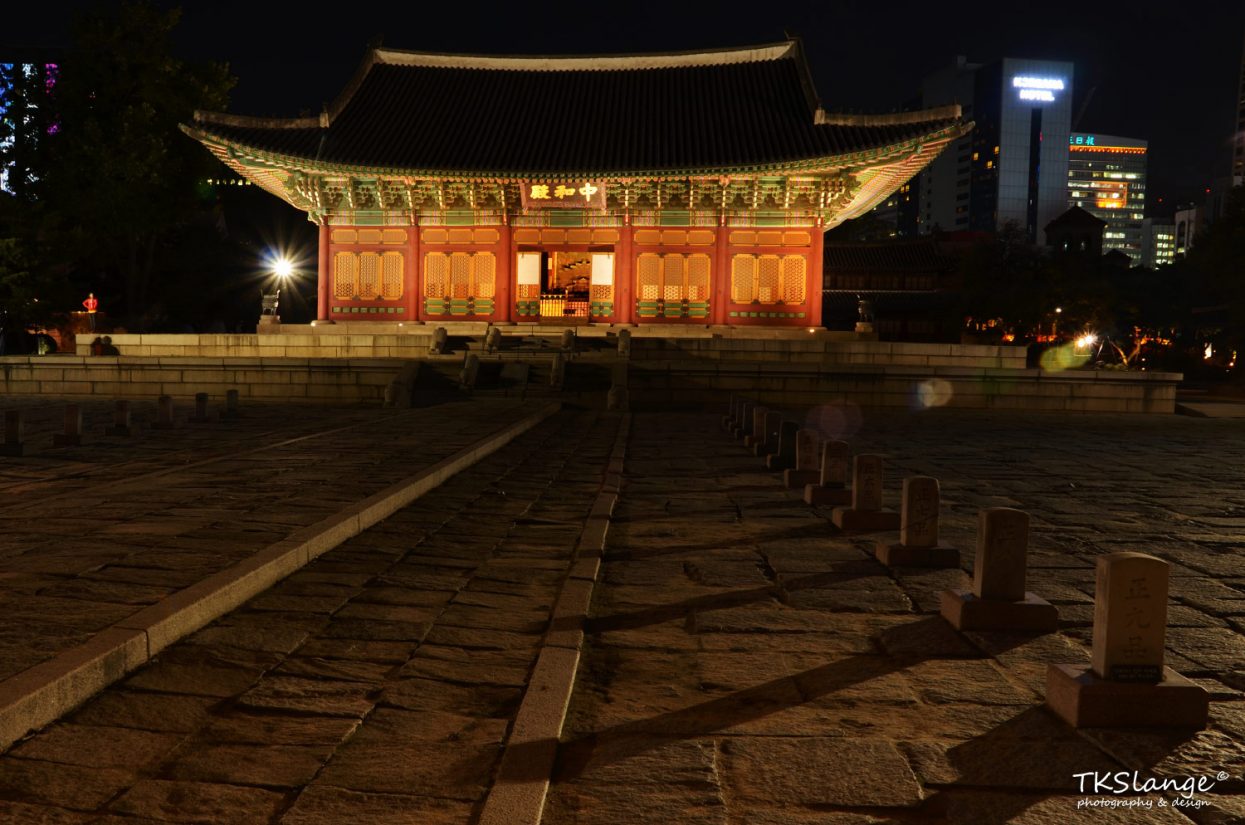 The main hall of Deoksugung Palace.

After visiting Deoksugung I took the subway back to Hongdae for some dinner. This is when I ran in to my first big language problem. So far all people I had talked to understood English (at least up to a certain degree) and all signs had been in both Hangul and English. However, in the restaurant I entered nobody was able to speak English to me. Fortunately there were some pictures of the available dishes on the window with English names underneath. Bibimbap was the only dish that I knew about, as I had read about it in my Rough Guide, so I just pointed that one out. A waitress immediately brought me a bottle of filtered water and in a few minuted my dinner was also ready. A big bowl with cooked vegetables topped with an egg, together with a bowl of rice and a couple of banchan (sidedishes) were placed on my table. So than the real challenge started: eating with chopsticks. With barely any experience I knew this was going to be tricky for me. After only a few tries I already decided to give up. It was just not working for me. Not this day. I was too exhausted from my flight and walking around Seoul and too hungry to keep trying. Fortunately spoons are also always present on the table.

Unlike chopsticks in other Asian countries, Korean chopsticks are made of steel. Reason for this is that in ancient times the king used to eat with silver chopsticks, as these would change colour if his food had been poisoned. Since silver was too expensive for the common people, they turned to steel. Another explanation is that steel chopsticks are more sanitary and can be reused. You will usually find the chopsticks in a wooden box on your table, together with steel spoons. The spoon is for eating soup, stew or liquid side dishes. The chopsticks are used for all other solid food. Traditionally rice is also eaten with a spoon, but eating with chopsticks is accepted. I will discuss Korean food and dinner etiquette more elaborately in a later blog.

After dinner I headed straight  to bed to catch some good sleep, because the next day I had to wake up early to go on my DMZ/Panmunjam tour. More about this in my next blog!